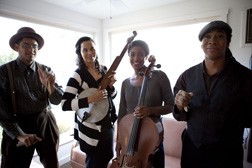 Leading Americana music rag The Alternate Root recently released its list of the Top 30 Female Roots Vocalists, and the list features a plethora of past and future Door Community Auditorium (DCA) artists. Nearly a quarter of the artists honored by Alternate Root have appeared at DCA in the past or will grace the stage in Fish Creek this summer.

DCA Executive Director Cari Lewis says, “We’re excited that the high-caliber artists we bring to DCA are being honored by a publication like The Alternate Root. So many of these women have put on great shows at DCA, and we’re looking forward to booking more of them—and their male counterparts—in the future.”

The DCA box office is located at 3926 Highway 42 in Fish Creek and is open 12 – 5 pm, Monday through Friday. For more information visit dcauditorium.org.