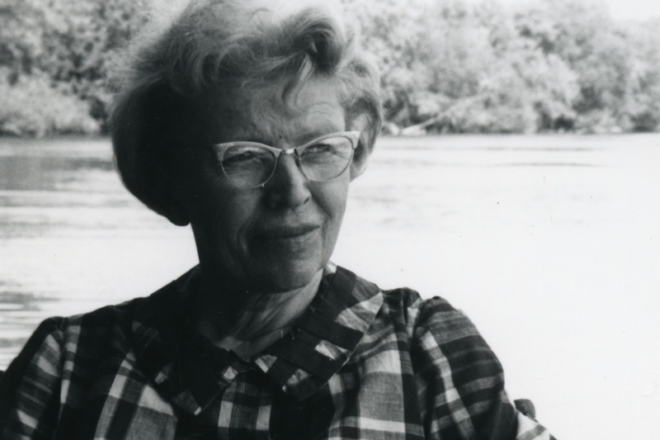 Lorine Niedecker (1903-70), who has been called “America’s greatest unknown poet,” lived almost her entire life in Wisconsin. Many of her poems were inspired by the wildlife, the water and the people in and around her home on Blackhawk Island (which is not actually an island, but a flood-prone peninsula near Lake Koshkonong, southeast of Madison). A visit to The Ridges Sanctuary in Door County in 1966 was the inspiration for one of her most impressive poems, “Wintergreen Ridge.”

In many ways, Lorine Niedecker fits the stereotype of the eccentric, impoverished artist struggling to share his or her truth with an unresponsive world. People who knew her described her as a petite, shy, frail-looking woman who wore abnormally thick glasses.

Her adored father earned enough money as a carp fisher to send Niedecker to Beloit College, but when carp fishing fell into disfavor, he ventured into the business world, for which he was ill suited. She was forced to drop out of college after two years.

Her father’s solution to his chronic unhappiness was to take a mistress (who was only three years older than Lorine) and squander his resources on her, leaving Niedecker with little in the way of an inheritance. But at least he was able to build her a one-room house on Blackhawk Island – without plumbing or telephone service, but with electricity.

Indeed, the men in Niedecker’s life tended to betray her. Her first marriage failed after two years; then she settled briefly in New York, where she became the mistress of Louis Zukofsky, a promising young poet. He had founded a literary movement of sorts that he called Objectivism, an avant-garde approach that emphasizes clear, sharp images and structure rather than content or theme. The poem is an object that’s separate from its meaning.

He offered helpful criticism of her poetry, but when she became pregnant (possibly with twins), Zukofsky demanded that she get an abortion, in spite of her pleading. She reluctantly had the abortion.

Although Zukofsky soon married another woman, Niedecker continued to correspond with him for years, going so far as to type his manuscripts and send money to him and his family. He was a well-known literary figure, and his endorsement of Niedecker’s work would have been a big help as she struggled to make a name for herself. Instead, her “reward” for her devotion was Zukofsky’s refusal to write a prologue or recommendation for any of her books.

Back on Blackhawk Island, Niedecker wrote poetry that was published both in England and America. She earned a reputation as a gifted poet but not enough money to live on. Her chronically poor eyesight made a desk job impossible, so she was forced to accept cleaning work at Fort Atkinson Hospital, scrubbing floors like a literary Cinderella.

Two years after beginning work at the hospital, she fell joyfully in love with a widower, Harold Hein. He was a dentist from Milwaukee who appeared to share her feelings. His family welcomed her warmly; even Zukofsky wrote to express cautious optimism.

But months passed without a marriage proposal. When Niedecker finally asked Hein about his intentions, he told her that he would never marry again and planned to retire to California. Then he marched out of her life, leaving her miserable.

At the age of 60, Niedecker met Albert “Al” Millen, an industrial painter and heavy drinker who had left school after the eighth grade. He was a great reader, however, and she decided to marry him almost at first sight because he could give her “time and space for poetry.”

Zukofsky was skeptical, and, as one might expect, Millen could be a difficult husband. (Niedecker’s friends became concerned for her safety after he drank himself into a rage and threatened one of them with a gun.) Still, he supported her work as a poet, and he drove her on long trips around the Great Lakes region, where she found inspiration for such works as “Lake Superior” and “Wintergreen Ridge.”

Niedecker’s poems have been described as “spare” and “haiku-like.” She never identified herself with any of the fashionable literary movements, and as a poet – as in her life – she went her own way. Like the Japanese masters of haiku and the five-line tanka, Niedecker typically preferred short poems. She developed her own variation on the tanka, in which the third and fourth lines rhymed: River-marsh-drowse / and in flood / moonlight / gives sight / of no land

Like the Objectivists, Niedecker strove to create compelling images and concise, muted lines. (She once referred to her desk, and perhaps her mind, as a “condensery.”) Here, in an autumn poem, a deserted boat promises the eventual return of spring: They’ve lost their leaves / the maples along the river / but the weeping willow still / hangs green / and the old cracked boat-hulk / mud-sunk / grows weeds / year after year

Objectivist poets wished to convey emotion, but they shunned lush, romantic ecstasies or agonies. As Zukofsky wrote, “The emotional quality of good poetry is founded on exact observation.” Niedecker often followed his advice, as in her comment on Harold Hein’s desertion: My life is hung up / in the flood / a wave blurred / portrait / Don’t fall in love / with this face — / it no longer exists / in water / we cannot fish

Niedecker had long yearned for fame, and as years passed, she feared she would die without leaving a legacy. But she and Al were planning a vacation trip to Lake Superior, and she was convinced that the lake could inspire a masterpiece.

She prepared for the journey by clipping travel articles, reading widely about the geology of the Great Lakes and taking notes about where the most interesting rocks might be found. Although Niedecker is often described as a poet of water, her long poem “Lake Superior” deals almost entirely with geology and evolution. The poem is a development of a theme stated in the first four lines: In every part of every living thing / is stuff that once was rock / In blood the minerals / of the rock

In “Wintergreen Ridge,” Niedecker returned to the “exact observation” of the processes of life, as in this description of a bee pollinating a flower: Lady’s slipper’s glue / and electric threads / smack the sweets-seeker / on the head / with pollinia / The bee / befuddled / the door behind him / closed he must / go out at the rear / the load on him / for the next / flower

Niedecker died in 1970 without winning the fame she longed for. She never received a Pulitzer Prize or saw a book of her work published by a major company. For about two weeks after her death, Al was a weeping, broken man; then he perked up and wrote to his ex-wife, suggesting that they get back together. (They tried and failed.)

But Niedecker’s admirers, both in America and England, worked diligently to get her remaining manuscripts published, to bring out a book of her collected works and to arrange for a State Historical Marker on her property. (Apparently Zukofsky was no help.) On the marker, these lines from Niedecker’s “Paean to Place” appear: Fish / fowl / flood / Water lily mud / My life / in the leaves and on water / My mother and I / born / in swale and swamp and sworn / to water