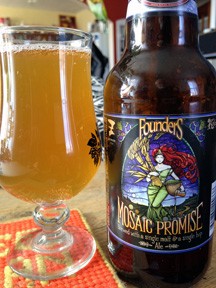 I had wondered aloud in a recent column about the Mosaic hop. While on a recent resupply mission, I was presented with a bottle of Mosaic Promise, an ale brewed with a single malt – Golden Promise – and a single hop – the aforementioned Mosaic.

It’s a golden-orange beer that pours with a slight haze. Once in the glass, you get a very pleasing big citrusy/piney/floral hop aroma.

The taste is palate-prickling hop dominant, but in a tolerable way.

Golden Promise is malted from a spring barley that was popular with Scottish distillers. It is said to rival Maris Otter, the traditional English ale malt base. Mosaic hops came on the scene in 2012, according to the variety manual of the Hops Growers of America. It is described as the daughter of a Simcoe and a Nugget-derived male. “It offers a unique and complex blend of floral, tropical, fruity and earthy characteristics that translate very favorably into several styles of beer,” the manual states. I should add that I looked this up after I smelled and tasted Mosaic Promise, which is made by Founders Brewing of Grand Rapids, Michigan.

Despite Founders’ slogan – “Brewed for us” – Mosaic Prize is brewed to benefit ArtPrize, which the brewery says is “the world’s largest art competition that takes place annually in Grand Rapids, Michigan.”

A simple beer brewed for art. Art beer. Cheers to that! 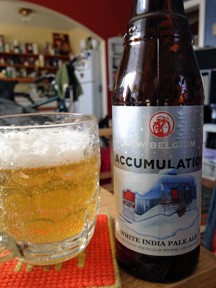 An email from a contributing writer in Algoma alerted me to a beer sale at a Sturgeon Bay grocery store, and thanks to a sales rep who was headed to Sturge, I suddenly found myself the happy owner of a case of New Belgium Brewing Company’s Accumulation for the unbelievable price of $12. That’s right, 50 cents a bottle. It was a true harmonic convergence. Woo hoo!

NBB calls this beer a white pale ale. I prefer to think of it as a BPA, or Belgian pale ale, because it looks like a wit and tastes like a hopped up wit, but looking at it from another perspective, it tastes like a spicy pale ale.

Either way you perceive it, this is a great beer.

Oh yeah, the name Accumulation? This is a winter seasonal, so, of course, the name references an accumulation of snow.

Wish I had accumulated a few more cases at that ridiculously low price. But since I didn’t, it means many more people are going to be able to enjoy this delicious beer. 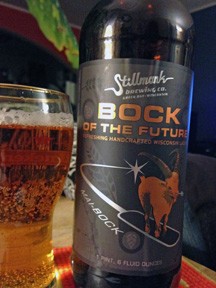 And one more beer that recently came my way – Bock of the Future, a Maibock and the first lager from Stillmank Brewing Co. of Green Bay.

Maibock is one of my favorite seasonals. Spring in a bottle. This one pops with a brightness you just don’t expect from a malt heavy style such as Maibock. It sings in your mouth and dances across the palate like a spring pixie. Goes great with a hot bowl of chili on a 25-degree night in March.