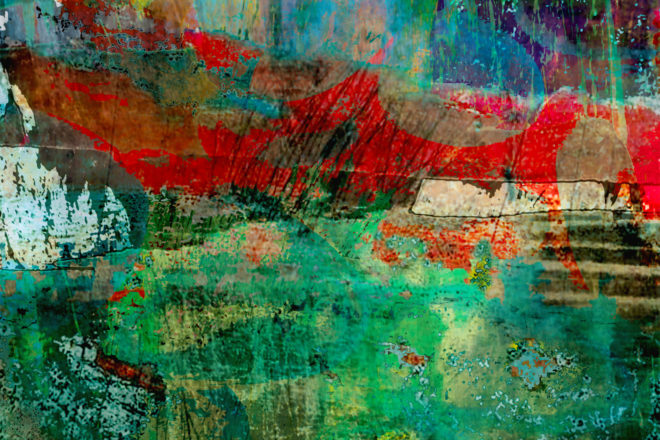 At Sotheby’s in Hong Kong recently, a deeply textured, randomly colored abstract painting by Gerhard Richter sold for about $28 million. It reminded me of images I had just seen at Idea Gallery in West Jacksonport. They sold for approximately $27,999,000 less, depending on the size and framing, but they were also rich in color, complexity, texture and beauty.

Idea Gallery owner/director/artist Dan Cross created these images with a computer and an Epson pigment printer, sometimes adding hand marking that he photographed and incorporated into the digital file. His images may have 50 or more layers generated using Adobe Photoshop software.

These layers allow Cross to build images from background to foreground, to design masks that can create lines such as cracked clay pots, or to construct areas that look like soft, black velvet, all in the same work. Sometimes he adds texture in hot wax, encaustic, occasionally with color incorporated, to create distinctive works that sell for more than the limited-edition pieces.

Twenty years ago, some collectors dismissed photo- or computer-based art as not worth collecting, but that has changed, in part because of people such as Cross who have been educating collectors.

“I explain the processes,” he said. “The computer is a tool – a very advanced tool – and if you don’t know how to use it, you can’t get there.”

Cross’ work can incorporate what looks like a drip of paint on a flat surface, but it’s so convincing to the eye that many times people want to touch it – to see whether they can feel the drip of paint that they can clearly see, but which exists only as an image.

“They can’t figure that out,” Cross said. “I’m not trying to trick people. I’m doing digital work, and I want to make it look like a painting. That’s why I called it digital painting.”

Cross has a degree in art education from UW-Green Bay and had planned to teach, but he graduated just as funding was cut for schools. Instead, he turned to graphic design, working for agencies and then running his own graphic-design business for 30 years. He still does graphic design for longtime clients, including some leading art galleries in the county.

Through the years, Cross has also done some educational projects: workshops, Exposure to Creativity offerings for high school students and courses in graphic design and photography. With the opening of Idea Gallery, now in its fourth year, he continues to educate visitors, explaining the work on display based on the extensive discussions he’s had with the artists whom his gallery represents.

“Part of my mission statement here is education about contemporary art,” Cross said.

That education has also led him to look at his own attitudes toward his art.

“Graphic design has always come into my work,” Cross said. “At one point, I was conscious of trying not to be too graphic, so the techniques I’ve developed for working with a computer would simulate what I could do by hand.”

His response to this challenge has been to go back and forth between hand markings and computer imagery, sometimes with one or more layers of physical wax over the final image.

“If I made marks on paper as you see here,” Cross said, “then I photographed my markings and brought that into the computer.” And he builds those markings into his Photoshop file.

“I record all my specifications when I printed, when I might do some adjustments in the printer outside of my file,” Cross said. “And then I can go back and get an exact repeat. But if I go into working a piece by hand – that I can’t replicate. Then that will be a one of a kind, and then the price reflects that.”

After a slow start coming out of the coronavirus-driven lockdown, business has picked up and even pulled ahead of last year’s revenues in August and September. But Cross is looking forward to a break from being open seven days a week.

“I’m looking forward to winter,” he said, “when I really get to focus, shut in the studio with no interruptions. Then I have the time to get messy and combine physical handwork with what I’m doing on the computer.”