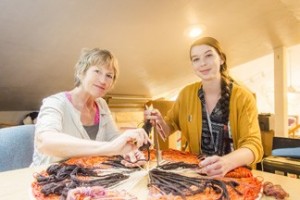 “I really enjoyed working every day, creating,” Carissa Heinrichs said. “Nice to keep going, not to fall out of it. I enjoyed working on the loom, putting the pieces up.”

“A very productive summer!” Wendy Carpenter said. “We produced a lot of work. The creative energy, so different having two people. I work more, stay focused!”

Heinrichs, from Cedarburg, attends the Herberger Institute of Design and the Arts at Arizona State University where she is working on a BFA in multimedia work. Carpenter, a well-established member of the art community in Door County, is a fiber artist who has operated a gallery in Fish Creek for over thirty years.

An internship, which extended from mid-May until early August this past summer, brought Heinrichs to Fish Creek where she lived and worked with Carpenter at Interfibers Studio Gallery. The young artist has an interest in photography, printmaking, and fibers, and is intrigued by the possibility of combining the three. Her work with Carpenter is in preparation for her senior thesis, a project that will culminate in an installation piece scheduled for exhibition on her campus during the spring of 2014.

“Sand Hill Crane” serves as an example of Carpenter’s skill as a sculptural weaver. Photo by Len Villano.

The Herberger Institute of Design and the Arts appealed to Heinrichs as a place of study because the art institute was not an entity unto itself but also connected to a university. “It was nice I didn’t have to choose,” she said, “but could do other academic work as well.” She had sent a single application, visited only that school, and found the institution offered financial aid. “I went on a leap of faith!” she laughed.

In December of 2012 Heinrichs visited Carpenter in Fish Creek to allow the two women to find if they were compatible artistic personalities and could successfully live and work together over a summer’s time. They felt that they could, and the internship proved them correct in their decision.

“I had never woven on a loom before,” Heinrichs said, and discovered “having the tools is amazing. My major is mostly conceptual,” she added.

Carpenter’s fiber work is best characterized as abstract wall sculptures, inspired by forms in nature and often woven off loom. She offered as an example a work in progress involving the collaborative efforts of both women.

Petals had fallen from an arrangement of poppies onto a tabletop, and when they had dried, Carpenter found that four of them placed together, as in a four-leaf clover configuration, created “the basis of a great design for a circle tapestry.” 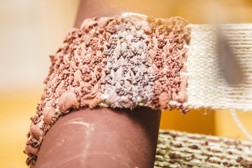 The off-loom piece employed a circular metal hoop with a warp strung in a cross configuration; the emerging weaving resulted in an abstraction of a poppy.

Finished pieces displayed on the walls of the Interfiber Gallery also include components woven on a loom. The women were presently working on a a strip of fabric about eight or ten inches wide woven of narrow dyed torn strips of a chenille bedspread. Some sculptures on display consist of branches with muffler-like woven pieces artfully draped from them.

A number of the installations are less abstract, as is the case with the series of Oriental chair pieces. But only after a closer examination do the elements of furniture become apparent. The abstract sculptures of a group of Guatemalan women in a market place, are far less abstract, once the viewer understands Carpenter’s ongoing altruistic winter project.

During the county’s off-season she travels to Guatemala where she provides indigenous women weavers with sewing machines and her own clothing designs to help them create and market products that will appeal to the tourist trade. In the past, Carpenter explained, the women wove bolts of traditional fabrics that were less marketable, but with the more cosmopolitan perspective she could bring to them, the weavers were able to improve their lives economically.

The sculptures depicting these women consisted of a woven dimensional central element for each piece with a suspension of fabric cords. While North American viewers might not make the connection, “Guatemalan women understand the piece immediately,” Carpenter said. 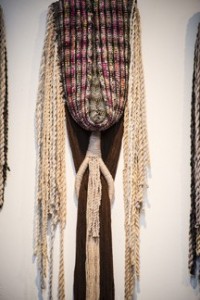 After her summer working with a mentor, Heinrichs’ sculpture began to take shape in her mind. From a conceptual perspective, the young artist is interested in the recontextualization of “here,” where she happens to be at present. The environment determines how people inhabit it, in a reciprocal sort of way. For example, people living in the upper Midwest, as opposed to people in the desert Southwest, not only construct their homes differently but also develop different lifestyles.

Heinrichs’ installation piece, she thinks, may depict a temporary dwelling place, a series of tent-like weavings incorporating images on panels that will be suspended from a circular off-loom weaving. The sculpture will be flexibly interactive with its viewers.

At this point in her education, Heinrichs’ plans for the future are uncertain. She may apply for graduate school, perhaps teach English at Napal, maybe work as a travel writer and photographer. But whatever her choice, she intends to continue working on fine arts projects.

When Carpenter looks to her future, “I don’t see myself retiring,” she said, “but I’d like to go in a different direction. If I could get into an art co-op, I might.” But teaching will continue to be a part of her life, whether instructing classes at The Clearing, helping women work with textiles in Central America, or serving as a mentor.

“I’m a believer in sharing,” she said. “Older people always have to try to share. I love it when older people share with me. And I want to share with younger people.”

The collaborative fiber work of Carpenter and Heinrichs will be shown at Interfibers Studio Gallery, 9204 Silk Road (Cty. F), Fish Creek, with an opening reception taking place Aug. 24 from 3 – 7 pm.

For more information about the gallery and Carpenter’s work, call 920.868.3580 or visit interfibers.com.