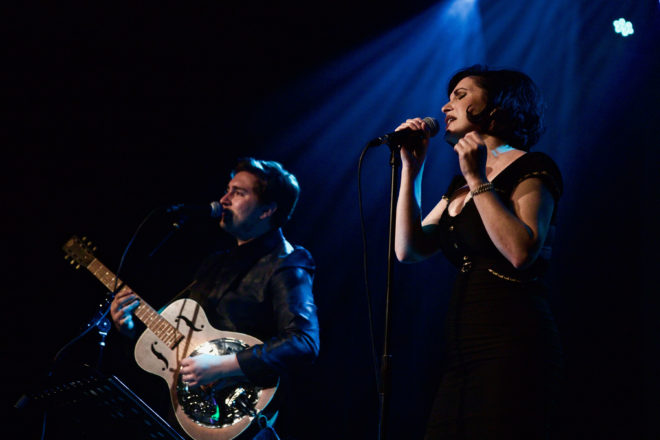 A Tale of Two. Submitted.

Door County has enjoyed performances by some phenomenal acts over the years, including the Glenn Miller Orchestra, Taj Mahal, Willie Nelson, Bobby McFerrin, Loretta Lynn, Ben Folds and many more memorable and well-known artists. The ability to book artists of such caliber and fame in a relatively small area – on a peninsula, no less – comes from a little-known tour hack that most concertgoers have never heard of: an “anchor date.” But more about that in a minute.

A concert offers a chance for audience members to be carried away by the beauty of the music, get lost in introspective thoughts inspired by the lyrics or dance off a hard day’s work. Musical performances are intended to give the audience a reprieve from “real life,” and if the musicians are doing their job right, the audience shouldn’t be thinking about the logistics behind the show.

Though musicians love the stage time and the chance to connect with the audience, the boring truth is that booking and playing concerts is largely about logistics – and even more so if the performers are on a multi-date tour.

Tour logistics include things like finding a way to shake the creases out of the show shirt you found accidentally balled up in the bottom of your bag; calculating whether you’ll have time to eat dinner between the sound check and the show, or whether you should just scarf down a granola bar instead; whether it makes more sense to book an Airbnb or hotel rooms; whether the budget will allow you to take the full band on tour or only a duo; and how to make the drive from Chicago to New York City feasible by finding shows on the way out and back.

Now back to the concept of the anchor date, which is one of a music tour’s key planning elements. If you live in a relatively small place, the bands that come through on tour are probably playing a “routing show,” which means they’re en route to an anchor date: a large, well-paid gig that makes the budget for the whole tour make sense and helps to pick up any shortfall from smaller routing gigs along the way.

If you’re in a Chicago band, for example, and you have a festival offer in New York City for $3,000, you might find a small show in Columbus, Ohio, on the way out, and another show in Pittsburgh on the way back. As long as you make enough money on those shows to cover accommodations and food, you’re going to come out ahead overall. Those routing shows also allow you to break up the journey to NYC and cover some of the travel costs associated with the trip.

Sometimes these routing shows are not on an obvious travel path to a bigger show, but they’re close enough to keep the tour party generally on the right track. And that’s where gigs in places such as Door County often come into the picture.

Talent buyers such as Cari Lewis, executive director of the Door Community Auditorium (DCA), use this to their advantage. During the past 10 years, DCA has been able to secure high-profile acts for its concert program because those artists were in the area (or close enough) to play at larger venues.

“Occasionally we have a group flying in and out just for our date,” Lewis said, “but more often, the groups are playing other gigs in the Midwest. We often see that our artists are heading to or coming from Big Top Chautauqua in Bayfield, the Minneapolis Zoo, Ravinia or across the lake at Interlochen Center for the Arts. We sometimes plug into the tours of artists performing at festivals like Summerfest, Blue Ox, Eaux Claires.”

Touring is always a financial gamble, but the added risk of COVID-19 and the inability to predict when people will feel safe again in close concert quarters have led some of the previously confirmed acts at DCA to cancel because they’ve lost their main anchor dates.

But those cancellations haven’t dampened Lewis’ energy in putting together a great summer program.

“For early summer 2021,” she said, “we are tweaking our booking metrics a bit and focusing on smaller groups – Midwest, regional and local acts. Artists who can make sense at a 25% capacity. Hopefully, later in the summer or fall, we’ll be back closer to full capacity. We have a deep pool of amazing artists living in or close to Door County, and we’re pretty excited that our reopening will include several musicians that we consider neighbors and good friends.”

This is good news for some of the smaller touring acts that might not have been able to draw a big enough audience previously to secure a booking at the 725-person-capacity Door Community Auditorium.

It also highlights a problem that a lot of areas such as Door County face: a gap in the market between the local artists and the top-tier artists who perform at DCA between their Illinois or other Midwest tour dates. The need for a large anchor date means that a lot of excellent, mid-level touring bands never make it to areas such as Door County because they can’t yet secure those huge festival and arena gigs to make the trip financially viable.

In an effort to help bridge this gap and bring more great music to the county, the Peninsula Pulse is launching a new summer series called Pulse Presents to feature popular acts from all around the country. The tours will become financially viable for the artists not only through anchor dates such as DCA and local municipality concert series, but also by creating mini-tours throughout the county during a long weekend.

This new venture – launching this summer – will welcome two Nashville-based bands that will perform throughout the county: gothic Americana band A Tale of Two in July, and the soulful, funky, bluegrass band The Danberrys in August.

A Tale of Two