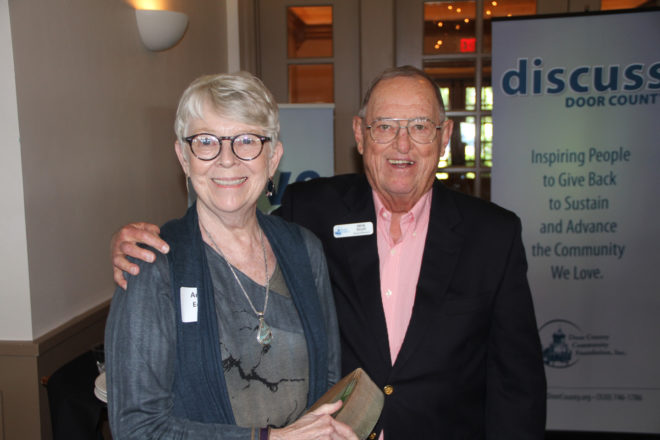 At the July 6, 2016, Celebration of Giving, the Door County Community Foundation recognized Annie and Dick Egan as the 2016 Philanthropists of the Year. Each year, I am humbled to have the opportunity to share a few thoughts about the remarkable people who are given this honor.

As I often do when preparing a few comments, I start by re-reading the words of people who are much more thoughtful and insightful than me. I was recently revisiting David Brooks’ book, The Road to Character, when I was struck by a particular passage that I had highlighted some time ago.

Brooks was writing about those rare people you come across who seem to possess what he calls an “inner cohesion.” Brooks writes, “After you’ve known them for a while it occurs to you that you’ve never heard them boast, you’ve never seen them self-righteous or doggedly certain. They aren’t dropping little hints of their own distinctiveness and accomplishments.” I didn’t realize it when I originally highlighted this paragraph, but Brooks is writing about people like Annie and Dick.

I have played a tiny and tangential role helping facilitate the Egans’ generosity going back to my time working in Green Bay nearly 20 years ago. I’ve been to numerous meetings, dinners and receptions they’ve hosted for charities in our community. I’ve stayed with them in their home in Florida on several occasions. I’ve even helped Annie hang artwork and gone to baseball games with Dick.

Yet in all the time I’ve known them, never once have I heard them boast, nor seen them self-righteous or doggedly certain. Nor have they ever dropped the tiniest hint of their own distinctiveness or accomplishments.

As Brooks says, couples like Annie and Dick “radiate a sort of moral joy. They perform acts of sacrificial service with the same modest everyday spirit they would display if they were just getting the groceries. They are not thinking about what impressive work they are doing. They are not thinking about themselves at all. They just seem delighted by the flawed people around them. They just recognize what needs doing and they do it.”

This is not to say the Egans are perfect or have never faced struggles or difficulties of their own. I have been honored to hear of some of those trials and been given the opportunity to learn from their experiences. Yet, it is precisely those internal struggles that have made Annie and Dick into the generous souls we celebrate today.

Annie and Dick Egan have deep family roots in Door County. Annie grew up in Green Bay and Dick in De Pere. Both of their families became summer Door County residents in the 1950s. They married in 1963 after Dick graduated from Yale University and served as an officer aboard the aircraft carrier USS Hornet. Annie earned a bachelor’s degree from St. Norbert College in 1976 and a Master of Science Education from UW — Oshkosh in 1980. Annie also holds a Doctor of Ministry degree. Together, they raised three sons — Tim, Joe and Dan — and now have eight grandchildren.

In 1995, upon Dick’s retirement as CEO of Little Rapids Corporation in Green Bay, the Egans were able to move to the place that had their hearts from a young age, Door County.

For many years, Annie was director of the Retreat Center at St. Norbert Abbey. She has been an active volunteer advocating for child literacy and working one-on-one with children in Green Bay, Santa Fe and Milwaukee. Annie has always been dedicated to the arts community. She is currently co-curator of the Door County Community Foundation Lobby Gallery and is on the Women’s Fund of Door County’s ARTrageous Committee.

Annie and Dick are the founders of FUVIRESE USA, Inc. a 501(c)(3) charitable organization providing financial and administrative support to FUVIRESE, a charity working with disabled adults and children in Banos, Ecuador.