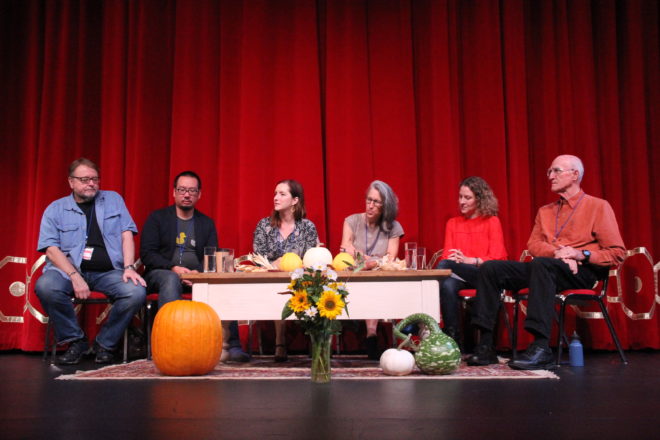 “A story is a vessel shaped to hold and preserve human experience,” said Scott Russell Sanders, world-renowned essayist and novelist. By that definition, the Washington Island Literary Festival 2019 held hundreds of these narrative vessels this past weekend, Sept. 19-22.

Jane Hamilton had the 150 people in the audience singing about apples, Sanders treated them to a picture book and Luis Alberto Urrea had the crowd laughing as he acted out a passage of his book concerning the antics of his Mexican-American family. Paula Carter taught 20 high school students and many more adults how to tell stories better while Rebecca Makkai focused on the difficulties in doing research on the AIDS epidemic in Chicago that no one wanted to write about.

“What a fabulous event for our beloved island and for us all,” said Elizabeth Evans Sachs, co-chair of this year’s literary festival.  The theme was “Generational: How We Build, Grow and Change,” and each of the authors’ books presented a different perspective on this theme.

Bao Phi told the audience it was his daughter who inspires much of his poetry and children’s books. He visited Washington Island School on Friday to read his book A Different Pond to elementary school students and to answer their questions about writing. The school event was sponsored by the Washington Island Women’s Club.

Most of the writing workshops led by authors on Friday were sold out and 110 people attended the banquet at the Island Diary on Saturday, where the Norbert Blei Poetry Award and Write On Door County Flash Prose Award were announced and Island author David Ranney gave a presentation on his new book Living and Dying on the Factory Floor:  From the Outside In and the Inside Out.

The Washington Island Writers’ Walk was opened with six plaques located a special public places throughout the island that contain some of the most powerful words from each literary festival. The 6.3-mile trail is mapped out in a new brochure available at the Washington Island Ferry Office and the Visitors’ Centers.