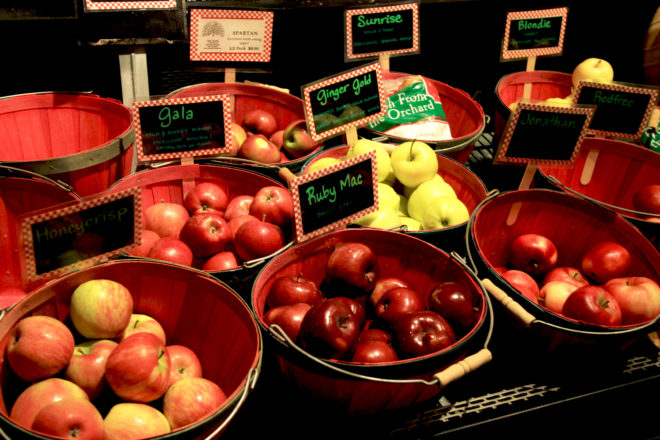 Fall is often associated with those spicy, earthy notes of cinnamon and clove, and with things that are baked, breaded and soul-warming. Well, there are two sides to every leaf, and I’ll argue that the crisp tartness of apples and the resulting cider are also worth celebrating. This weekend – if you aren’t going full pumpkin at Egg Harbor’s Pumpkin Patch Festival – here are two places to celebrate apple season and embrace the fruitier flavors of fall.

Seaquist Orchards, located two miles north of Sister Bay on Highway 42, is known for its abundant fruit trees: first harvesting cherries in mid-summer and now harvesting more than 25 varieties of apples and pears. Before the operation closes its doors for the season after Nov. 4, visit to stock up on the apple harvest and join the fun during Apple Fest on Saturday, Oct. 12, 9 am – 5 pm.

No matter what your sweet tooth entices you to buy, don’t leave without apples! Although Seaquist does not offer apple picking, you’ll enjoy sampling and learning about 20-plus apple varieties in the back portion of the market. Honeycrisps and Cortlands are the top sellers, but the variety ranges from sweet to tart, and there are recommended uses for eating, baking, sauces, salads and jam. You’ll find a helpful chart in the market that tells which varieties are best for which use.

Apples are available by the pound, half peck and whole peck, and some varieties are available by the bushel. You can even buy boxes of 20 safely packed apples that are perfect for shipping to a lucky friend or family member. Or, buy your apples in liquid form, as freshly pressed cider sold by the half gallon and gallon, fresh and frozen.

Perplexed about how many apples to buy? Here’s a quick reference that you’ll also find posted in the market: Two pounds of apples makes three cups of applesauce, and one bushel makes 16 to 20 quarts of applesauce. Use six to eight medium-sized apples for one nine-inch apple pie.

Seaquist Orchards does not offer a pick-your-own option, but several orchards in Sturgeon Bay do, including:

The crew at Island Orchard Cider is also hard at work harvesting its apples on Washington Island to use in its ciders.

“The 2019 harvest is looking very good this year,” said Yannique Purman, who owns the company with her husband, Bob. “We started harvesting in August and will continue harvesting into November. We grow 35 different types of apple trees, and the fruit ripens at different times.”

The apples being harvested now will end up kegged or in the beautiful bottles you can see on the shelves of the Purmans’ tasting room.

If you’re a cider fan, visiting the Ellison Bay taproom is a must. The classic varieties of Island Orchard Cider can be purchased elsewhere in the county and beyond, but the taproom has a full selection of cider that’s not available anywhere else, including the newest menu additions: an aperitif called Pomona, Ice Cider and a wild, fermented specialty cider called Wild Thing.

Pomona, available in 375-ml bottles, is the result of aging the brut cider into a strong brandy, then adding fermenting apple cider and aging it for one year in bourbon barrels. At 17 percent ABV, it’s a strong sip that can be enjoyed alongside dessert or alone as an after-dinner drink.

Ice Cider, also sold in 375-ml bottles, is slightly less potent at 11 percent ABV. It’s a variety that capitalizes on the distinctive Door County climate. In a process that’s similar to the one used to make ice wine, the apples are harvested and pressed at peak ripeness, then frozen through long winter nights, then slowly cold fermented. This is also considered an aperitif, to be served before or after a meal.

Try all three of these new varieties, plus 13 more, in the Ellison Bay taproom, which is open daily, 12-6 pm, through Oct. 27; then on weekends through Dec. 22.

And, as the days turn ever more chilly, make the most of cider season with a warm spiced cider. This recipe is courtesy of Island Orchard Cider.

Pour the cider and other ingredients into the glass carafe of a coffeemaker. Turn the hot plate on. (Alternatively, use a slow cooker set to low or medium.) Allow time for the ingredients to heat; then serve warm. Remove the whole cloves after several hours.