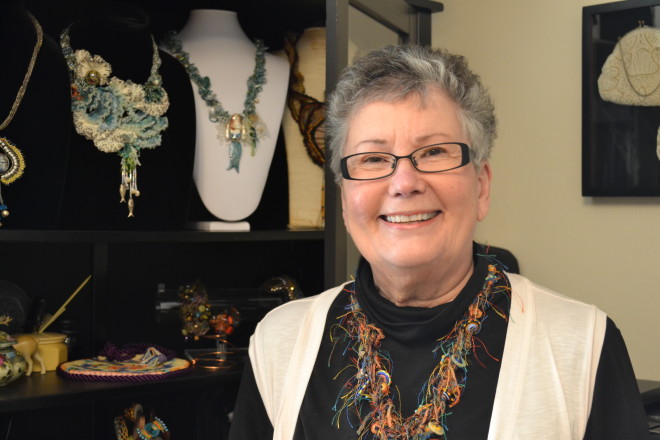 Mary Lou Allen remembers the first time she set foot in the bead vendor marketplace at the annual Bead & Button Show in Milwaukee.

“I could hardly see the other end. I was so overwhelmed I had to walk out – I had never seen so many beads!”

Fifteen years later, she has become a regular at the annual bead show, having had at least one of her eye-catching sculptural necklaces chosen as a finalist each year since. 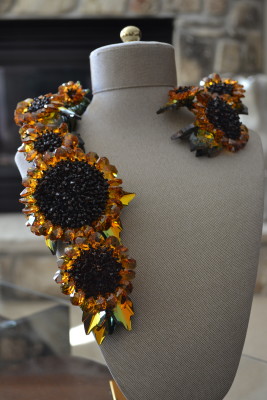 Allen’s necklaces are more art than wearable fashion, inspired by her love of color and shape. Since coming to the hobby 20 years ago by way of a beading technique book, Allen has taken 55 classes on the subject, many at Sievers School of Fiber Arts on Washington Island with bead collector, jewelry designer and instructor Diane Fitzgerald.

Though Fitzgerald is well known for her geometric designs, it was her florals that captured Allen’s attention and inspired many of the pieces that have made it into the Bead & Button Show. Imagination dominates her free-form technique, which boils down to two very simple steps: first the bead, then the design.

When she found vibrant geometric ruby beads, she knew each represented the petal of a flower. When she spotted a number of red olive-shaped beads, she decided to pay homage to her homeland with a cherry-inspired necklace, “Life’s A Bowl.” Though she works primarily in glass beads, she has also incorporated shells, stones and feathers into her designs.

“The individual pieces are from my imagination. I go to bed at night and before I go to sleep, I can see all these things and I’m putting beaded pieces together before I fall asleep. That’s been going on a long time,” Allen says. “But probably the biggest inspiration for me was Diane’s work. She’s a master beadworker and she has taught all over the world. She’s such a wonderful teacher.”

“Beaders are very sharing,” she adds. “We don’t have any secrets. We share our techniques with each other and we’re always learning things. You just can’t stop learning, there’s always something new going on; there’s always some new beads…it’s just grown tremendously.” 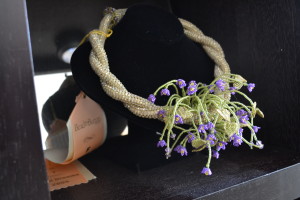 Allen’s necklaces and techniques have been published in countless magazines, and she has shown in regional, national and international invitational juried shows and exhibitions. Recently she was awarded the Bronze Medal Grand Prize in the Fire Mountain Gems and Beads 2015 jewelry-making contest featuring Swarovski crystals for her piece, “Red Roses.”

But she hasn’t let the success of her intricate work take away the fun of the hobby – with each placement of a piece comes a personal challenge to make something completely new and different for next year.

“It was just so much fun to do and then when I started entering things, I thought it was fun too because it was a real challenge to me every year,” Allen says. “I have to come up with a new piece. It kept me beading and what am I going to do that’s different than what everybody else does?”

Mary Lou Allen’s jewelry can be found at Sievers School of Fiber Arts on Washington Island.