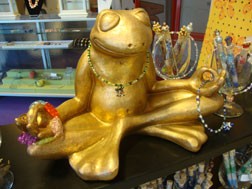 I had no idea there are so many choices, so many ways of artistic expression using beads. Tara Rossman, owner of Bead Bucket in Ephraim, had that same thought in 1997 when she opened her shop thinking she’d just try out the idea for the summer. Seventeen years later beading is more popular than ever. Rossman credits the trendy wrap bracelets or yoga jewelry as they are called, as one of the main reasons for the surge of popularity in beading.

The types of beads and the number of ways to use them in design are infinite. There are seed beads, strings of beads, beaded beads, glass beads, and an assortment of wire, metal and clasps. Design is only limited by the imagination.

Though all bead shops sell beads and beading supplies, I found shop owners have their favorites. For example, Rossman’s favorite is beaded wrapped bracelets using leather and freshwater cultured pearls.

“Beading is relaxing and meditative,” Brooking shares with me. One of the Japanese techniques adapted for American culture is the Kumihimo braiding technique. In Japan the technique is performed on special wooden stands where strands of silk are braided to make long decorative cords. In the U.S. beading world, plastic disks are used to braid and create long strands of braided beads. 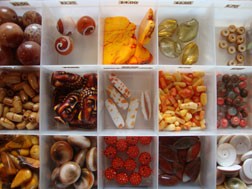 Beth Ruth, owner of the Acme Bead Company in Sturgeon Bay, uses a technique called “lampwork,” using a torch to heat, melt and shape glass creating her one-of-a-kind acorn glass beads. Even this technique has a connection to days past. The term lampwork comes from the time when oil-fueled lamps were used to melt glass to shape beads.

As Brooking gently holds out the hand-stitched beaded amulet for me to see – shimmering iridescent shades of green and blue – I realize that it’s the cross-cultural connection within beading that I find fascinating. The amulet was made using seed beads and the Peyote or gourd stitch, a stitch adapted from Native American culture.

Perhaps beading is a way to reconnect with our ancestral past.