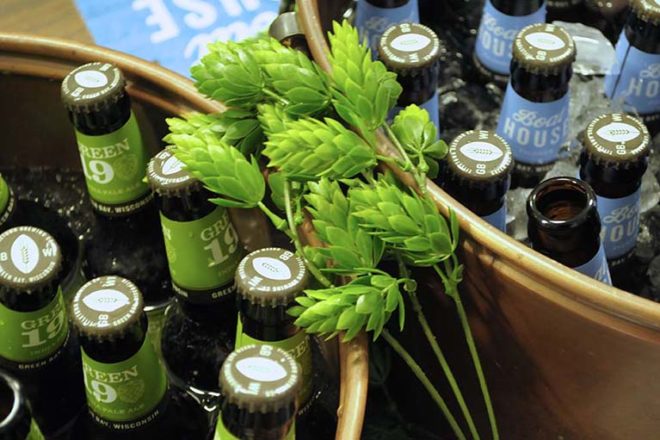 Roar Off the Shore Returns March 26

How would you like to sample more than 200 beers and 50 wines from across the region, eat delicious food and do good for the community?

Not only do these ingredients sound like the makings of a perfect spring Saturday, but they are, in a nutshell, the mission of the Roar Off the Shore Brewfest, hosted by the Dyckesville and Kewaunee Lions Clubs on March 26, 2-6 pm.

“Yes, it’s a fundraiser for both of our clubs, but it’s also a great thing for the community because people are able to get out and be with friends for a good cause,” said Dyckesville Lions Club member and planning committee member Jill Bernhardt.

When the Kewaunee Lions Club hosted the inaugural event in the fall of 2007 at Heritage Farm in Kewaunee, microbrewed beers were the latest thing to hit the food and beverage scene, making the popularity of a fundraiser focused on them an enticing venture. But as similar festivals began to join the landscape and fall season, the event moved to the spring. It also took up residence in a few different venues over the years until landing in its current home in the exhibition building at the Kewaunee County Fairgrounds, 625 3rd St. in Luxemburg.

Although the event has undergone a few changes during its 15-year run, one thing has remained constant: its commitment to raising funds for charities, other local nonprofits and natural-disaster relief efforts.

“Whatever we raise is shared among different community projects,” Bernhardt said. “It’s not just one specific thing. It’s spread out among various things.”

Since the two teams joined efforts after the fest’s third year, they have funded a variety of community projects with the event’s profits, including community vision screening, improvements to Red River County Park, scholarship opportunities, support for Special Olympics and Toys for Tots, Bruemmer Park Zoo improvements and more.

“We also try to keep the breweries and wineries local to the northeast region and bring in other local businesses,” Bernhardt said.

Advance online ticket sales are now closed, but tickets will be available at the door for $50 each starting at 12 pm on March 26. Find out more at roarofftheshore.com.