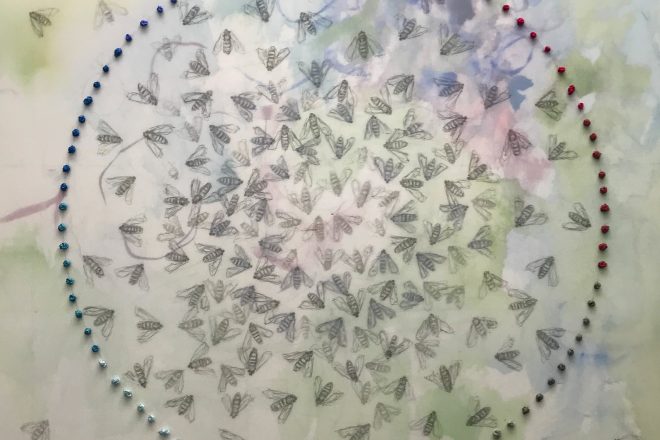 Shan Bryan-Hanson plays several roles in the world of art. She’s a painter with an MFA from the University of Montana; she curates art galleries and collections at St. Norbert College; and she teaches several art courses. It’s easy to imagine that all of these roles would nurture each other, but it’s where they’re opposed that is the most interesting.

Teaching and painting feed each other, but Bryan-Hanson accepts that she will have less time for studio work during the academic year. Things ebb and flow with the schedules, however, so she said she can split her painting time at the college and in her small home studio in Sturgeon Bay.

“One challenge of teaching today is that there are so many trends appearing on social media,” Bryan-Hanson said. “So I ask students what they like about certain work. Do they like the line, or do they like the texture? And then how can they bring that into their own work?”

This interplay with her students influences her role as a curator, and it, too, has changed with the internet.

“A few years ago, abstract art had a big moment on Instagram,” she said. “It’s all online at our fingertips. The gatekeepers are kind of eliminated – it’s not just museums and magazines [making decisions about what good art is]. It is crowd sourced.”

Yet even with unfettered access to the art world close at hand, Bryan-Hanson looks further back in time to find her inspirations. She mentions Hilma af Klint, a Swedish painter from the first half of the 20th century who created nearly 1,200 paintings, including about 200 abstract works – well before the abstract work of Wassily Kandinsky and Piet Mondrian ever appeared – and also left 124 notebooks, asking that they not be viewed until 20 years after her death, which occurred in 1944. Her work was shown at the Guggenheim in New York in 2018.

“Her work has a really spiritual quality which was reflected in her writing,” Bryan-Hanson said. She’s also “drawn to the weirdness” of 16th- and 17th-century Dutch floral paintings, especially work by Rachel Ruysch.

“At [first] glance, they are simply beautifully crafted paintings, but on closer inspection, they are strange worlds, with bug-eaten leaves, dying flowers, insects and rotting fruit,” Bryan-Hanson said. “In my work, the juxtaposition of delicate color, floral patterns and insects – either in mass or at a very large scale – is influenced by this tradition. Though I think insects are beautiful, they can also be perceived as ugly or scary – certainly not loved by everyone.”

The work of Bryan-Hanson (shanbryan-hanson.com) that’s on display through Dec. 22 at the Door County Community Foundation, 22 N. 3rd Ave. in Sturgeon Bay, has layers of imagery with a lot of patterns – and a lot of bees. There are also dragonflies and other insects, but bees predominate. Her husband, Brett Hanson, is a beekeeper, and they have three hives of Italian honey bees.

She started stitching layers together (as pictured) in 2018, usually starting with a watercolor or gouache whose colors show through subtly.

“I use stitching to add another layer of pattern and texture,” Bryan-Hanson said. “I also like the reference to traditional craft that maybe hasn’t been considered a high art form, but should be.”

The work on display is subtle, with soft, muted colors. She strives for more delicate qualities in her work, which is why she shies away from oil on canvas, opting instead to use layers of paper and drafting film to create a more ethereal quality.

Bryan-Hanson likes patterns and repetition, and she appreciates well-crafted work. But more than anything, she believes that art should be unexpected.

“Part of its job is to surprise us,” she said. “I love to see something that I haven’t seen before.”

In that way, perhaps her curation can surprise even her tech-savvy students.

“We try to do a lot of different kinds of shows in a variety of mediums,” she said. “Some are recommendations from our faculty. We think about the work we’d like our students to see.”