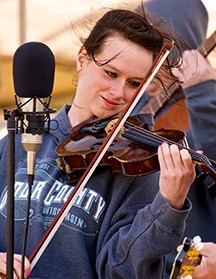 Fiddler Hana Rass at a performance in Door County.

When Hana Rass went down to Milwaukee, she was looking for a gold to win.

And on Aug. 8, the 23-year-old Little Sturgeon resident did just that, taking home the honor of Grand Champion Fiddler at the 2015 Wisconsin State Fair.

It is perhaps the highest point in a musical career that goes back 16 years to when Rass, daughter of Dan and Teri Rass, decided that she would follow in the musical footsteps of her father and learn a stringed instrument.

From the beginning, she has forged her own path. Classical lessons opened her introduction to the fiddle but when boredom set in two months into her lessons, rather than ditch the instrument as is common at a young age, she decided to move into a genre she had adored her entire life – bluegrass.

For the next decade, her dad (a longtime country musician in the county) taught her how to play the stringed instrument. During that time, she also began playing with her family’s band, Fairland Bluegrass Band (made up of Dan Rass on mandolin/vocals; Teri Rass on bass/vocals; Calyn Saindon on banjo/vocals; Neil Saindon on guitar/vocals; and Hana on fiddle/vocals) and set her sights on becoming a professional musician.

“I absolutely love the music,” Rass said. “I eat, breathe and sleep it. It’s what I do; I enjoy it, I love it, I feel like I have a passion for it. I’m very blessed to have been given this talent and a big part of it is I grew up going to these bluegrass festivals. You will see some of the top bands, bands that have won Grammys, and after they are done playing, they’ll walk off stage and they will go to their merchandise table; you can walk up to them, you can shake their hand, you can talk to them. They are very personable, very friendly, and it makes you feel like family. That’s what I like about that genre of music.”

In June 2010, her father’s band opened for Nashville-based bluegrass unit Mountain Heart during a performance at Door Community Auditorium in Fish Creek and Rass was able to connect with fiddler Jim VanCleve.

“He is the current fiddle player for Josh Turner, and I take online Skype lessons from him,” she explained.

Two years ago, Rass decided the best way to achieve her dream of becoming a professional musician was to get her name out there. She began competing in fiddle contests, taking first place against a dozen players of all ages at her very first competition, the East Troy Bluegrass Festival. Rass has taken part in a number throughout the Midwest since then, almost always placing within the top three, including a second place finish at last year’s State Fair contest.

Rass explained that competing fiddlers are judged on technique, intonation, tempo and the ability to play songs true to form: ho-downs should be danceable and waltzes should be smooth and progressive.

In this year’s Open Division, she performed the “Gardenia Waltz” and “Calgary Polka.” With the difficulty of the waltz she chose, she was not expecting to take the top spot.

“The entire time I’m pretty much playing harmony to myself,” she explained. “It’s a very hard song and it’s one of those things where if you don’t play the right note, everyone is going to hear it because you’re playing two strings at once.

“It was really exciting and I definitely did not expect it,” she said of the win. “There was a lot of really good competition and I was convinced that somebody else would take it, so it was a big surprise and I’m very happy.”

From here, Rass will head to the Minnesota State Fiddle Contest on Aug. 29 – 30 and to East Troy in September.