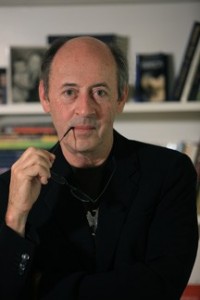 Poet Billy Collins will share his extraordinary way with words at Door Community Auditorium on August 5.

Serving as national Poet Laureate is serious stuff. England has had one since the 12th century, an honorary position that required composing verse for important national occasions for the traditional compensation of an annual butt of sack (keg of sherry). The United States has officially named a laureate since 1985, but no wine comes with the responsibility, only honor.

When past U.S. Poet Laureate Billy Collins writes poems with titles such as, “Another Reason Why I Don’t Keep a Gun in the House” or “Taking Off Emily Dickinson’s Clothes,” eyebrows of self-proclaimed purists might rise. However, both poems invariably please readers, as the first is not a diatribe for gun control, and the second is not a steamy seduction; rather, they amuse with their wit and elegance, their unexpected imagery and irreverence.

Billy Collins is frequently acknowledged as the most popular poet in this country. He received a six-figure advance from a publisher for a three-book agreement, an offer unheard of in the world of poetry. He recorded Billy Collins Live: A Performance in New York, with an introduction by his actor friend Bill Murray. He has been a frequent guest of Garrison Keillor on A Prairie Home Companion. And his poetry readings regularly sell out.

Of course Collins has a serious side. During his term as Poet Laureate (2001-2003) he was asked to write a poem in honor of the victims of 9/11, and produced “The Names” which he read to a joint session of Congress. He had initially declined to read the poem in public, and would not include the piece in a published collection of his work as he did not want to capitalize in any way on the horrific events of that day.

The light-heartedness of some of his poetry belies the academic stature of the poet. Collins earned both an MA and PhD in English from the University of California, Riverside. He is a Distinguished Professor of English at Lehman College (City University of New York) in the Bronx where he has taught for over thirty years. He has given workshops and served as visiting writer throughout the U.S. and Ireland, and has served on the advisory boards of several literary journals.

Over the years he has received prizes for his poetry, a number from the prestigious Poetry magazine; and has been awarded fellowships, including one from the National Endowment for the Arts. His work has appeared in numerous periodicals and has been included in anthologies and textbooks.

Collins’ poetry is available both in print publications and audio recordings. While U.S. Poet Laureate, he instituted Poetry 180 for high schools, providing a poem for each day of the school year. The program can be visited online.

An artist of Collins’ stature is often available to the public only through telecommunications or travel. Door County has a unique opportunity to experience the poet up close and in person. Because organizers of the event believe that the reading provides young people a valuable experience as they continue their education, a special advanced ticket price of $5 is offered to all students college age and younger.

Collins will read his work at the Door Community Auditorium in Fish Creek at 7 pm on August 5. Sponsors of the event are Write On, Door County – an initiative to facilitate and promote writing in our community; and Wisconsin Public Radio.

For more information about Collins, and to read a selection of his poetry, visit http://www.billy-collins.com.