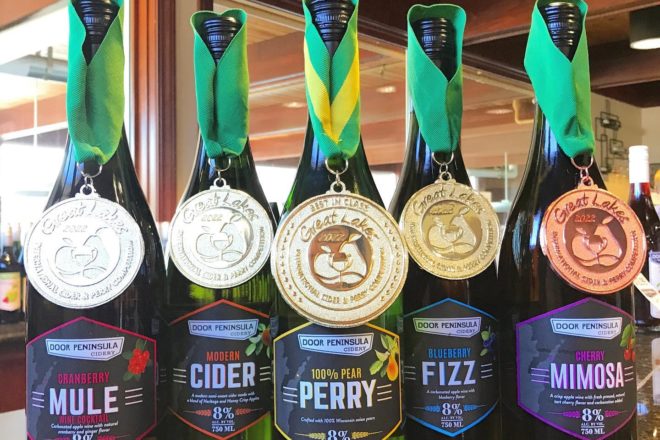 At the 16th annual Great Lakes International Cider and Perry Competition, held in May in Grand Rapids, Michigan, the winery’s Perry Cider was awarded Best in Class for Modern Perry Ciders out of 21 entries. Its Blueberry Fizz and Modern ciders also received gold medals.

At the 22nd annual Finger Lakes International Wine & Spirits Competition, held June 21-23, the winery’s Sweet Cherry Wine was awarded a double gold medal and won Best in Class, beating out all other fruit wines entered. This is the second year in a row that Sweet Cherry – one of the original four wines that the winery produced when it opened in 1974 – has earned this award. Its wine list now features more than 60 different varieties of grape, fruit and blended wines, as well as a line of ciders.

Try them for yourself with complimentary tastings at Door Peninsula Winery, 5806 Hwy 42 in Carlsville.

Sangria for a Cause

There may not be a more perfect combination than Door County cherries and a refreshing glass of sangria – except when you throw in a good cause such as the Boys and Girls Club of Door County.

Throughout August, one of two featured wines at Lautenbach’s Orchard Country is its cherry sangria, made from its estate-grown Montmorency cherries with refreshing, tropical-fruit accents. The other is Audrey Grace, the winery’s first estate-grown grape wine crafted from Door County estate-grown Maréchal Foch grapes and named after the owner’s first grandchild. For every bottle of either wine sold this month, a portion of the proceeds will be donated to the Boys and Girls Club of Door County. Stock up at orchardcountry.com or at the market at 9197 Hwy 42 in Fish Creek.