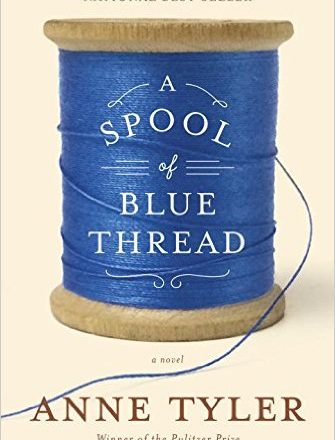 Fans of Anne Tyler’s novels who have come to expect from her a familial saga peopled with quirky characters will not be disappointed by her latest book, A Spool of Blue Thread. Her twentieth novel is set in Baltimore and spans four generations.

Central characters Red and Abby Whitshank have reached that age when their kids are married and have children of their own. Red has a successful business as a building contractor and a son who is set to take over when he retires; Abby is a former social worker who retains the mindset of her profession.

They live in the house that Red’s father Junior built for a client, but had secretly planned for himself, steering the builders toward design decisions that appealed to him. When Junior, through not-so-subtle machinations, bought the house from them and moved in his family, he viewed the home as evidence of his upward mobility.

After the demise of his parents, Red took over the family business, settled into the home, and all seems well, but as in most families, outward appearances sometimes belie underlying complexities. Petty rivalries and jealousies, secrets and frustrated expectations, past histories and interjections of in-laws all add bumps to the terrain of family life.

Tyler’s skill as a storyteller lies in her ability to create extended families that seem real. At times, reading her novels is almost like peeking in windows to watch the lives of neighbors. Her characters aren’t larger than life; they are life. Petty details of living accumulate to create what appears to be a shared life with the reader, but then unfortunate events unexpectedly occur, and the reader, too, vicariously deals with them as the characters sort things out.

Perhaps those readers (like this one) who are enjoying the golden years of retirement will especially relate to Red and Abby, who are now the patriarch and matriarch of their family, but at the same time are experiencing the unsettling phenomenon of having adult children wanting to “parent” their parents. The couple worries about their own health while continuing to be concerned about the happiness of their offspring.

A Spool of Blue Thread could easily have become a romance novel in which trials and tribulations, to everyone’s relief, work out and problems are eventually tied up in a nice fluffy bow. But not here. Some questions in the story remain unanswered, some episodes arbitrary, and the resolution ambivalent.

“This is the way the world ends,” T.S. Eliot wrote [in “The Hollow Men”], “not with a bang but a whimper.” Tyler obviously understands the wisdom of this assertion, and rises above the ranks of popular novelists in her handling of plot, perhaps one of the reasons she received a Pulitzer Prize for her eleventh novel, Breathing Lessons.