Winifred Vail Boynton died in 1974, and the estate that was her family’s summer home, just south of Baileys Harbor, may not be so familiar to local residents today as it was to the generations who helped to build and maintain it during the middle years of the last century. Lawrence University in Appleton has owned the property since 1975, and Mark Breseman, the property’s executive director, wants the community to feel as much a part of the treasure it is today as did those who helped to create it nearly a century ago. 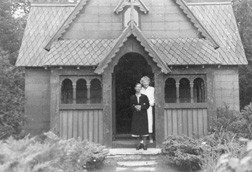 Hedwig Heinrich Peil, the longtime gardener for the Boyntons, and Mrs. Boynton at the chapel.

At a recent meeting of the Baileys Harbor Historical Society, Breseman presented a brief history of the estate Winifred named Björklunden vid Sjön or, in English, Birch Forest by the Water. In 1928, Winifred and Carleton Vail of Highland Park, Illinois bought 330 acres at the end of what was then Muckian Road, now Chapel Lane. The property included more than a mile of Lake Michigan shoreline, and the price was $2,000. Their imposing stone home, begun in 1929, was built by Frank Oldenburg.

Winifred was a fine artist, mostly self-taught, and she decorated the house with large murals, based mostly on Bible stories or Scandinavian myths. One of them, 24 feet long, depicted her fanciful version of the creation story. Rather than showing Adam and Eve being ousted from the garden, she painted herself and her husband leaving Björklunden – she wiping a tear because it was October, time to return to their winter home. Her interpretation of Elijah ascending into Heaven, depicted him waving his top hat and driving a Norwegian sleigh over Björklunden. She also built some of the home’s furniture, decorating it with Scandinavian designs. The caretaker’s home, built in the early 1930s, was a replica of a Norwegian stabbur, a two-story building used on farms for grain storage.

In 1932, Winifred’s magical world almost came to an end when Carleton was fatally injured in an auto accident near Institute. She and her young son took a nine-month trip to Europe, where she was impressed with the architecture, especially the stavkirke (medieval wooden church) in Lillehammer, Norway. In 1934, Winifred married Donald Boynton, an old family friend and a widower with four children.

For years, Winifred dreamed of building a stavkirke on the grounds of Björklunden – an idea that was roundly rejected by Donald and their combined family of six now-grown children. Finally, in the late 1930s, the family relented. On the day local farmers, working with plow horses and a scoop, dug down three feet to bedrock, they uncovered a perfect cross formed of crevices in the limestone – a good omen, Winifred felt. 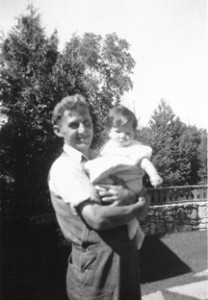 It took a summer to build the outside of the chapel. The cornerstone was laid on Aug. 1, 1939. Winifred spent the next eight summers painting 41 murals with Biblical themes on the inside plastered walls. Her technique was similar to that Michelangelo used in the Sistine Chapel, except that he worked on wet plaster and she on dry. In Winifred’s book, Faith Builds a Chapel, originally published by the family and later reprinted by Lawrence University, she described a major setback to their plans.

Before they left Björklunden in the fall of 1939, they had painted the exterior redwood walls gray in an attempt to make them look ancient and weathered. The following spring they were aghast to find them looking not ancient, but very red. Winifred single-handedly scrubbed the entire building with a tri-sodium phosphate solution.

In the winters, back in Highland Park, both Winifred and Donald studied woodcarving in evening classes at the local high school and with practice, became very adept. They carved the massive door, the six five-foot-high pews, the raised pulpit, the stand to hold Winifred’s family Bible, the altar and the baptismal font that was her pride and joy. It took 656 hours of work and depicts the 12 disciples doing the jobs they had in their earlier lives. However, when it came to the two small bears holding up the pillars framing the front door, Winifred was stumped. Bears at the zoo were uncooperative in posing, she reported in her book, but at last she found a model, sitting on the floor of the Field Museum and sketching the mounted Kodiak bear. Finally, in 1947, the chapel was completed.

Björklunden’s wonderful gardens, maintained with the help of Hedwig Peil, a young German bride and the grandmother of Lynne Mattke and Suzanne Bauldry, were showplaces. The estate had one of the only hard-surface tennis courts in Door County and one of the Boynton children remembered that Basil Rathbone’s son and daughter-in-law used to come to play when they were at Peninsula Players. The Vail-Boynton family had many wonderful summers at Björklunden, but as the parents grew older, they wanted to ensure that it would always be available to be enjoyed by the public. 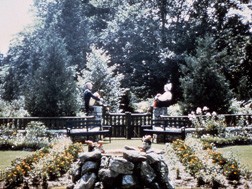 The Boyntons dressed up and posing in the garden.

It was first offered to St. Olaf’s College but when officials said they planned to move the chapel to their campus, the deal soured. Northwestern University was interested but wanted the gift to be accompanied by a $1 million endowment. In 1962, the Boynton’s gifted the estate to Lawrence University in Appleton. Donald died four years later and Winifred in 1974, and the university took possession of the property the following year just as Mark Breseman completed his freshman year. For the next four summers, he lived on the estate, the first two as the sole Lawrence employee. He returned in 1998, as the university’s on-site administrator.

During his years here, he has seen a tremendous expansion of student academic programs and public seminars. An electrical fire that began in the lodge’s kitchen in August 1993 destroyed most of the building. To replace it, Lawrence built a new facility that opened in June 1996. Within a few years, there were waiting lists for both student and adult programs. A $4 million fundraising campaign more than doubled the size of the building.

During their many summers at Björklunden, the Boyntons enjoyed dressing in Scandinavian costumes and giving narrated tours of the chapel on Monday and Wednesday afternoons. These continue today, led by Lawrence students. Breseman emphasized that the university has continued to operate the estate in the spirit Winifred intended, open to the community.

Since 1995, Door Shakespeare, a professional theater company in Baileys Harbor, has performed on summer evenings beside Winifred’s garden and the walled garden itself has been recreated as it might have looked in an English village in Shakespeare’s day. Winifred must surely be pleased.