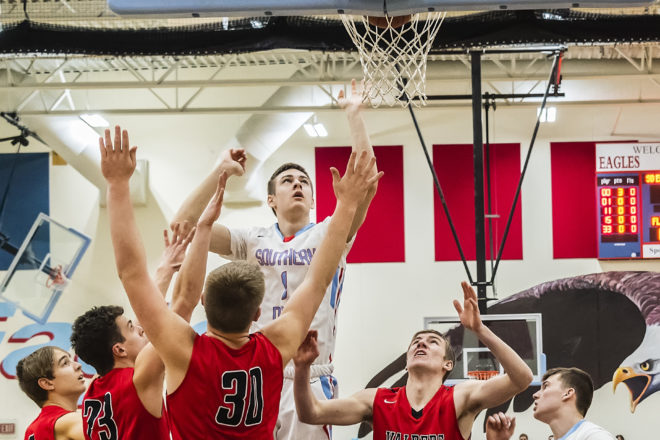 Returning for the Eagles is University of Wisconsin-Green Bay signee Ryan Claflin, who scored 15.5 points and grabbed 5.5 rebounds per game last season. Alex Daoust – who scored 3.1 points per game – is another returning starter.

“We will need Ryan to step up his aggressiveness on the offensive end for us this season,” Claflin said. “He can score in a variety of ways that will be important for our team. I also expect Alex Daoust to have a bigger role offensively for our team this year.”

“I think our team will be very competitive this season,” Claflin said.

“We have a group of young men who enjoy playing the game of basketball and are very competitive. Our success this season will depend on how quickly our younger players can adjust to varsity competition on a full-time basis.”

Despite losing 34 points per game to graduation, Coach Justin Burress said he is confident he can find players to fill this loss.

“We lost some scoring, but our leading scorers were also getting the most floor time,” said Burress, whose team won a regional title last season. “I think we have a lot of players hungry for time, and I’m sure they will step up to the plate. I feel comfortable that we can go deeper into our bench this year – hopefully leading to more balanced scoring.”

“Steebs has become much more aggressive and has worked hard in the offseason,” Burress said. “We look for him to be a floor general, but we want him to look for his shot and get to the rim anytime he can. Krause has a great outside shot, and when he is open, it is usually going in. Ash should bring consistent scoring and a strong defensive presence to our team.”

Burress said he is confident his team can have a successful season.

“I think that we can be even more competitive in the Packerland and make another run in the postseason,” Burress said. “Each year the coaching staff raises its expectations, and so do the players. As we say before each game, we strive to play hard, play together, play smart and most of all, have fun.”

The Pioneers, who broke an 80-game Packerland Conference losing streak with a win over Algoma on Jan. 7, enter the season with new coach Jason Bieri.

“[Robbie] is good because he puts the work in,” Bieri said. “He’s one of the biggest kids on the team this year and has worked on his inside game a lot this summer. We are anticipating him being a dual threat inside or outside, depending on when or where he’s needed. I wouldn’t be surprised if half his points come from in the paint.”

Bieri is counting on seniors Josh Pflieger, Evan Lardinois, Arthur Hocevar and Caleb Malvitz to contribute. Pflieger returns after taking his junior year off, and Malvitz is coming back after missing last season because of a shoulder injury.

Juniors Logan Beyer, Cole Dvorak, Spencer Evenson and Hunter Bemmann will contend for playing time. Dvorak worked his way into the starting lineup last season; Evenson will share guard duties with Haberli and Pflieger; and Bemmann will vie for minutes after working hard during the summer.