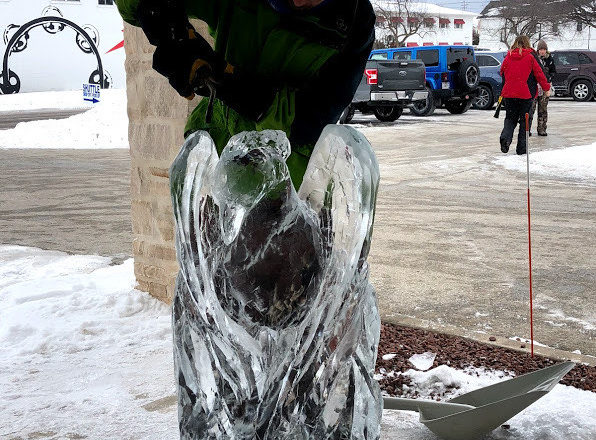 Garret Wendlandt, a professional carver since 2010, said his favorite thing about creating sculptures from ice is being able to work with and reveal the way light and shadow show through the ice. “One ​​of my favorite ice sculptures that I created during the Fire & Ice Festival was a phoenix rising out from flames. I really enjoyed the flowing movement of the sculpture,” he said. Photo submitted.

Try your hand at carving at Fire & Ice

Fire & Ice Weekend will return to Sturgeon Bay this weekend, and along with it, the ice-carving competition. Starting at 9 am, professional and amateur ice carvers will take to the streets, turning blocks of ice into works of art in front of area businesses.

Garret Wendlandt, who has been carving professionally since 2010, helps to coordinate the professional carvers at the competition, as well as carve. But his first experience with the competition was a few years before that, when he and his family decided to join the fun as community members and carve a block of ice together.

“The Fire & Ice Festival competition is a wonderful way to get out and enjoy the outdoors in winter while trying your hand at the challenge and reward of ice carving,” Wendlandt said.

He admits that staring at that solid block of ice that measures approximately 10 inches thick by 20 inches wide and 30 inches tall can be intimidating.

“Having a crystal-clear block of ice and set standard dimensions can be challenging for the design,” he said.

But those feelings of intimidation – or lack of experience – shouldn’t prevent people from trying their hand at carving. And a community event such as the Fire & Ice Festival competition is a perfect place to start.

“You don’t need to be a professional artist to try sculpting ice or snow,” Wendlandt said. “All you need is cold-weather gear, some tools and the courage to step out of your comfort zone and the flexibility to try something new.”

That’s exactly what Seth Wilson did when he and a fellow teacher, Brian Pahl, decided to enter the competition for the first time seven years ago. Wilson, who teaches technology and engineering education at Southern Door High School, said it was just something they wanted to try.

“You never know what you can do,” he said. The pair carved together for four years. Today, Wilson carves with another coworker, John McCaulley, who teaches art at Southern Door. Over the years, Wilson and his carving partners have grown fairly elaborate with their carvings.

“My favorites are probably the time we carved a pig on a spit and then ships in a bottle,” Wilson said. “Sometimes it turns out exactly the way you want, and sometimes worse. But that’s part of the fun.”

That being said, there are a few tips and tricks that can help when giving ice carving a first crack.

Wendlandt added, “From there, you sketch a silhouette [on the block of ice] and begin removing the pieces of ice that are not needed in the sculpture, always referring to your design.”
With the silhouette visible, the next step is to begin adding in the details.

“Say you are making a bird,” Wendlandt said. “If you want to have the wings more visible, you will cut a line for one of the feathers and then cut an opposing line to create the faceting that really makes the details show.”

Another tip: Always work toward the interior of the block of ice as you’re chipping away at the surface.

“If you work toward the outside edges, [the ice] is more likely to break off,” Wendlandt said.

You also want to have the right tools on hand. Coordinators of the carving competition have tools available to borrow for a $10 refundable deposit, but if you want to supply your own, Wendlandt recommends having a one-inch and two-inch chisel, a chain saw (if competing in the intermediate or advanced category), and – if you don’t have a chain saw – an ice rake.

“[It is] basically six ice picks in a row,” Wendlandt said. “It’s a wonderful tool for rough shaping.”

But the best tool to have on hand? Flexibility.
“Some things break, and that’s fine,” Wilson said. “If that happens, then you deal with it and adapt.”

Like when the weather doesn’t cooperate. Wilson recalls one year when he was trying to carve a sailboat, and the ice was melting faster than he could carve.
In that instance, carving with a partner was helpful so that they were able to work faster. But the other perk for carving with a friend is that it allows each person to bring their strengths to the process.

“While I can see the bigger picture of what we’re trying to carve, Brian and John can see the intricate details that bring it to life,” he said.

Both Wilson and Wendlandt encourage others to give ice carving a try, and no prior experience is needed.

“It’s a very approachable competition,” Wilson said. “Sometimes there are kids carving blocks of ice with their parents; it’s all ages doing it.”

By the end of the competition, the sidewalks of Sturgeon Bay are transformed into a gallery of original ice carvings.

Where can you find the carvers? Fire & Ice event maps with ice- and snow-block locations will be available at local businesses and the Destination Sturgeon Bay welcome center. Each map includes a People’s Choice ballot to cast your vote for your favorite ice sculpture. Find out more about the ice-carving competition and other Fire & Ice Festival events at sturgeonbay.net.