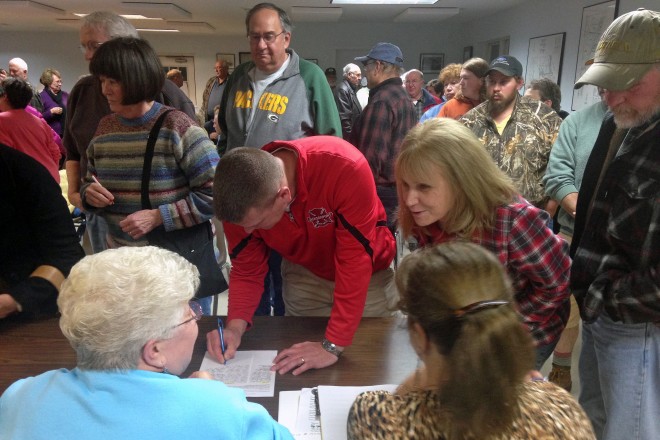 Jacksonsport residents show proof of identity in order to take the paper ballot vote on whether to approve a $100,000 property tax levy. The measure was approved 49-37 at the Nov. 18 meeting, but the meeting was adjourned before the town voted to approve the budget for 2016. Photo by Jim Lundstrom.

After much discussion – mostly against the idea of raising the tax levy in Jacksonport – the town voted 49 to 37 at the Nov. 18 budget hearing to allow the town to raise the tax levy by $100,000 for the next three years.

However, due to a procedural error, there was a vote to adjourn the meeting before the town voted on its 2016 budget. The more than 90 people who had packed the tiny town hall loudly squeezed out of the building as town officials realized the enormity of what had just happened and began scratching their heads about what to do next.

“We’ll have to contact the Wisconsin Towns Association tomorrow to see how to proceed,” said Town Chair Randy Halstead.

If you listened to the majority of the comments at either of the two budget meetings, it didn’t seem likely the town board’s request for a continuing tax hike of $100,000 would survive the night.

At an informational budget meeting held only six days before the Nov 18 hearing, Supervisor Tom Wilson explained that flat revenues, rising expenses and a history of fiscal conservatism on the town board was forcing the board to request a continuing $100,000 hike in its property tax levy. A one-time $100,000 hike in 2006 was the last time the board raised the levy.

Wilson, Halstead and Supervisor Tim Bley attempted to explain to town residents that while the cost of everything has risen, town revenues have not, making it difficult for the town to maintain its assets, such as roads and the clearly inadequate 30-year-old town hall/fire station.

Also a part of the discussion was the town’s jewel, Lakeside Park – which offers the first glimpse of Lake Michigan as you head north on Hwy. 57. Everyone was appreciative of how the town very smartly added to the park with the purchase of the Koulias Property, especially with the bulk of the $766,800 purchase price coming from grants. But the majority seemed opposed to the $1 million-plus price tag that has been bandied about for an update to Lakeside Park. The board has said repeatedly that is a conceptual idea/price tag.

The board felt plenty of pushback from the community at both the informational and public hearing meetings, specifically on what the town planned to do with the tax hike. Many people insisted that the board go back to the drawing board and come up with specific plans for specific dollar amounts before they would agree to raising their own taxes. One man at the informational meeting referred to the town’s plan for a Capital Improvement Projects fund as a “slush fund.”

They also expressed concern that the town didn’t seem to have a plan for the extra money, other than nebulous thoughts about improvements to both Lakeside Park and the town hall. Several people said they wanted to see specifically where the extra money would be spent before they could support a tax hike.

“Aren’t you putting the cart before the horse? Shouldn’t you have a plan and then tell us how much money you need?” town resident Deb Logerquist asked at the informational meeting, a sentiment that echoed through both meetings.

At the more recent budget hearing, Jacksonport Fire Chief Tom Ash, who also serves on the town’s Buildings & Grounds Committee, gave a detailed account of plans for a $650,000 update of the town hall/fire station that will add 3,500 square feet to its footprint and bring it up to 21st century standards, including making the building and its bathrooms handicap accessible, installing fireproof storage for valuable town records and locker rooms for the firefighters.

“Right now the guys dress alongside the truck,” Ash said.

That did not raise oohs and aahs, as you might expect, but perhaps it showed in the tax levy vote.

Ash said two different builders gave estimates on the update and were within $15,000 of each other.

Ash explained that the fire department budget includes $58,000 annually that is socked away for important fire truck and firefighting gear updates. What the town wants to do is the same sort of thing, he said.

Ash was asked why his presentation hadn’t been made at the informational meeting, and explained that he was unavailable.

He also mentioned that Jacksonport is in the running for the site of a new county ambulance station, and that could involve some cost sharing for the town hall/fire station rehab.

While the majority of the public who spoke seemed to be against the tax levy due to a lack of details, several people did speak passionately for the town’s plan. The first of those was J.R. Jarsosh, who said he served on the town board starting back in the ’90s, so know what the board is going through in asking for this levy. He said you have to trust that the people on the board – your neighbors – are doing this for the common good. They are certainly not doing it for personal gain, he said.

“Who buys a house without having a nest egg?” he said. “The town board is asking us to give them the ability to have this nest egg.”

Jarosh made a motion that the town accept the $100,000 tax increase for three years. A woman suggested an amendment that $60,000 of that be earmarked for the town hall/fire station update, and after some procedural wrangling, it was all incorporated by Jarosh into one motion in order to save time, since all voters would have to be verified as full-time residents before they could vote Yay or Nay on their paper ballot.

Jacksonport Plan Commission member Little Bit LeClair also came to the defense of the town board. Identifying herself as one of the people to be most affected by passage of the levy hike, she said, “Am I opposed to it? Absolutely not!”

She attempted to nip in the bud the idea that everything that was being presented was brand new information. She said she will pay someone to cover her business so she can attend meetings, and she didn’t see most of the faces at this budget meeting at any of the poorly attended committee and full board meetings.

“Come to town board meetings. You can all come to them,” she said.

Which seemed a very good point since there was so much redundancy at the budget hearing, which might have been part of the reason for the procedural error.

Budget meetings can be pretty dull stuff, but sometimes the human need for comic relief has to cut through the fat.

At Jacksonport’s informational budget meeting on Nov. 12, Supervisor Tim Wilson gladly drew the short straw to explain to the electorate the town’s need to raise the tax levy by $100,000. He explained that while the cost of everything has risen, town revenue had fallen flat. He then went on to make a completely logical but also easily misinterpreted revenue grower for the town.

“We get lucky,” Wilson said, “we sell $11,000 worth of cemetery plots. We think that’s pretty sweet, but that doesn’t happen enough.”

“Thank goodness,” a woman in the audience said.

Wilson, realizing how it came out, said it probably didn’t come out the way he meant it.

“Strictly from a town revenue standpoint,” he said in explanation. “We want our town population going up.”

“We don’t want that one going up!” the same lady said.

After enduring a good portion of the budget meeting, Mary Witteborg stood up and in her outdoor voice asked the board to give her the actual number of dollars this budget request would cost her. When she was told $35 per $100,000 property value,” she said, “I can afford that. I’m outta here.”