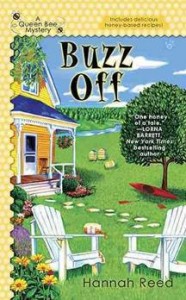 In her youth, Deb dreamed of working as a private investigator or as an undercover cop. So when Deb began writing a new series, the Queen Bee mysteries, she did something she always wanted to do – she went undercover with an alias!

Deb Baker was born in Escanaba, MI. As a chronic late bloomer, Deb graduated from the University of Wisconsin with a degree in English at the age of 45. Her first novel, Murder Passes the Buck, earned her The Authorlink International First Novelist Award where she took the mystery category, then went on to win Best of Show. The stories are set in her beloved Michigan backwoods and feature the unstoppable, unflappable Gertie Johnson. Deb also writes a second series called The Dolls To Die For. Deb is Vice President of the Wisconsin chapter of Sisters In Crime and is active with Mystery Writers of America.

About Buzz Off: It’s September in Moraine, Wisconsin, and things are looking up for Story Fischer. Her messy divorce is final; the honey from her beekeeping business has been harvested; and the Wild Clover, the market she owns, is thriving. Life seems pretty sweet until her mentor in he honey business is found stung to death in his apiary.

The book signing with Hannah Reed is free and open to the public. Copies of Buzz Off may be purchased at Novel Ideas, call 920 839-1300 for more information.