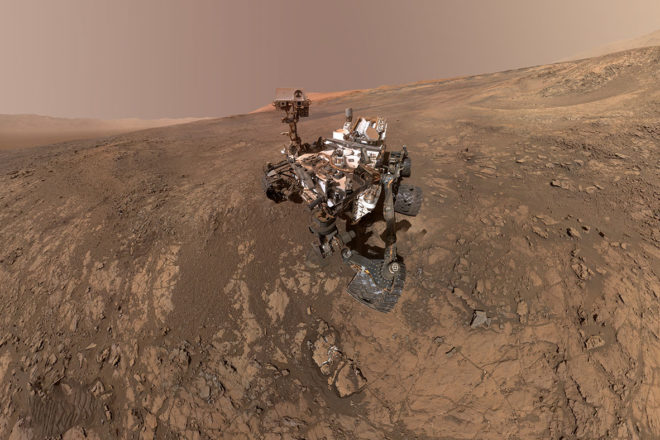 This self-portrait of NASA’s Curiosity Mars rover shows the vehicle on Vera Rubin Ridge, which it’s been investigating for the past several months. NASA photo.

Two reports released in the June 7 issue of Science give glimmers of hope for those who seek evidence of life beyond this puny planet. NASA reported recently that its robot rover Curiosity identified a variety of organic molecules – they are being referred to as “the building blocks of life” – within rocks on Mars that are 3.5 billion years old, which the lead scientist on that report said is not conclusive evidence of life on the Red Planet but it provides the possibility that the organic matter is from an ancient life source.

A separate report found seasonal changes of methane concentration in the Martian atmosphere, which also suggests the presence of living organisms, since that is the main source of methane on Earth. However, geological processes can also produce methane. But as the NASA Jet Propulsion Center scientist who led that report said, “We cannot rule out the possibility that it was created biologically.” What they are not able to determine is whether it is old methane that escapes seasonally from underground reservoirs, or if it is new methane being created underground.

In honor of these intriguing finds, we take a look at our fascination with Mars.

The length in feet of Curiosity. It runs on six wheels, stands about 7-feet high, has a 7-foot arm width and weighs one ton. In short, it is about the size of an SUV.

The length in months of Curiosity’s primary mission, which was to investigate whether conditions were favorable for microbial life. A NASA fact sheet on the mission states:  “Curiosity met its major objective of finding evidence of a past environment well suited to supporting microbial life.”

Galileo Galilei observes Mars with a primitive telescope. He was later sentenced to life imprisonment for proclaiming views observed through his telescope that were considered heresy at the time.

After observing Mars, Giovanni Cassini determines the length of a day on Mars is 24 hours, 40 minutes.

Mars is closer to the Earth than it would be until the year 2003. Its brightness in the sky causes panic.

Giovanni Schiaparelli develops names drawn from history, mythology and various terms for hell for mapping features on Mars. He uses the term “canali” for the streaks on the planet’s surface. The word means “channels,” but it led to a large detour in the study of Mars as proof built for and against the notion that intelligent life on Mars once created a system of canals.

The year Orson Welles and The Mercury Theatre on the Air broadcast a Halloween episode of H.G. Wells’ 1898 novel The War of the Worlds, panicking some gullible radio listeners into believing Martians had landed in New Jersey and were attacking.

The year NASA’s twin Viking landers touched down on different parts of Mars to search for life. That search found no organics, but two chlorinated chemicals that were found there led most to believe it was a dead planet.

The year NASA’s Phoenix lander found that the process used by the 1976 Viking landers may have been responsible for creating the chlorinated chemicals they found.

In August of that year, Curiosity landed inside the Gale Crater with the mission to determine if the planet was ever capable of supporting microbial life. Curiosity quickly confirmed the site had potentially been a habitable lake and stream system.