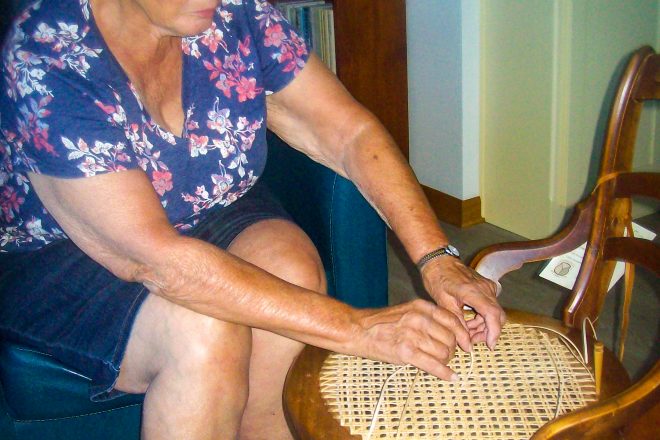 Nancy Rafal works on replacing the cane in a chair belonging to Karen Wilson. Because Rafal sees so many chairs similar to this one, she thinks they were probably a popular project in long-ago industrial-arts classes. Submitted.

Nancy Rafal is best known in Door County as a poet – she was, in fact, its fourth poet laureate. She’s also been part of the leadership of the Wisconsin Fellowship of Poets and the Wisconsin Writers Association, serves as a “clearinghouse” for other Door County poets, taught poetry at The Clearing and was instrumental in creating and maintaining Newport State Park’s Poetry Trail.

“Poetry,” she said, “has filled my life,” and her words in free verse give new perspective to everyday thoughts and occurrences.

But to many people in and well beyond Door County – throughout the state, U.S. and Canada – Rafal is also known as an experienced chair caner. It’s a skill often associated with a long-gone era, but she’s quick to point out that it’s not a lost art.

Caning is a multi-step process involving weaving moistened cane strips back and forth between the holes on the edges of the seat opening, first back to front, then side to side, then back to front again. Next, the caner threads cane from one side to the other, passing over the cane from Step 3 and under the cane from Step 1. After the strands running in both directions are pushed into double pairs, the caner weaves diagonally from the right in a specific pattern, then from the left. The result is a weave with hexagonal openings. Then the caner finishes with a spline: a woven strand that covers the holes.

Caning seems like a craft that might be passed down from generation to generation, but not in Rafal’s case. About 40 years ago, when she and her husband, Harry, were living in Glen Ellyn, Illinois, they bought a bedroom set with a cane insert in the headboard and decorative caning on the dresser. “I thought that was so cool,” she said.

But Rafal wasn’t hooked yet. Although there was a caning shop nearby, she visited it just once to buy a piece of sheet cane to insert in a table.

Harry died in November 2000, six years after the Rafals had retired and moved to Door County. The next month, a friend Rafal was visiting in Illinois took her to see a woman who sold antiques from her DeKalb home. There, waiting for her, was a chair that said, “Cane me, cane me.”

By January, after removing the ebonizing stain on her purchase and its damaged cane seat, Rafal had enrolled in a caning class at The Clearing taught by Arvid Munson. After two more years of classes, she was invited to be his co-teacher.

“I really liked caning when I saw it,” Rafal said, “and when I had the opportunity to learn how to do it, I really connected.” Caning, by the way, was first offered at The Clearing in 1976 and is among its longest-running classes.

Asked whether caning is difficult to learn, Rafal said, “Like any skill, it depends on the person’s background. I find it relaxing and meditative – like knitting, which I also enjoy. But some people get a deer-in-the-headlights look and never feel comfortable with it. They may finish Grandma’s chair in the class, but they won’t do it again.”

The SeatWeavers’ Guild, a chair-caning association with members from the U.S. and Canada, formed in 2007. Rafal joined the following year, has attended about half of its annual conferences since then at various history-rich locations, and hosted the 2012 conference at Old World Wisconsin. About a quarter of the 200 members attended, and each of them caned a chair for Old World Wisconsin.

“The conferences are popular,” Rafal said, “because even if you’ve been caning for a long time, you always learn something. For example, at the last one I attended, I learned a new technique so I don’t have so many knots under the bottom of the seat.”

Rafal uses real cane: a vine that grows wild in the forests and jungles of Indonesia. It hasn’t been domesticated, and as the forested areas are being eliminated, it’s becoming more scarce. Some caners – but not Rafal – substitute synthetic plastic cane. She also does rushing, a technique similar to caning that uses fiber rushing rather than real bulrushes, which are enormously difficult to work with.

Rafal said she’s not as fast now as she was during the long-ago winter when she caned ten chairs and a half-dozen rush pieces, but she’s traded speed for skill and still enjoys doing custom work for clients.

And what became of that chair from DeKalb that she caned nearly 20 years ago?

“An experienced caner judges work by the edges,” Rafal said. “That chair wouldn’t pass inspection by me now, but I still keep it as my desk chair for sentimental reasons.

“An assignment I’d love to have?” she asked. “The Milwaukee Art Museum has a fabulous French chaise lounge with really long strands of cane, probably from the 1800s. My fantasy is that they’ll call me to recane it.”

And, lest anyone think her interests are limited to poetry and caning, for the past 40 years, Rafal’s been collecting pop-up books, which now fill ten large totes. Last month she had a great time at the national convention of the Moveable Book Society in Denver.