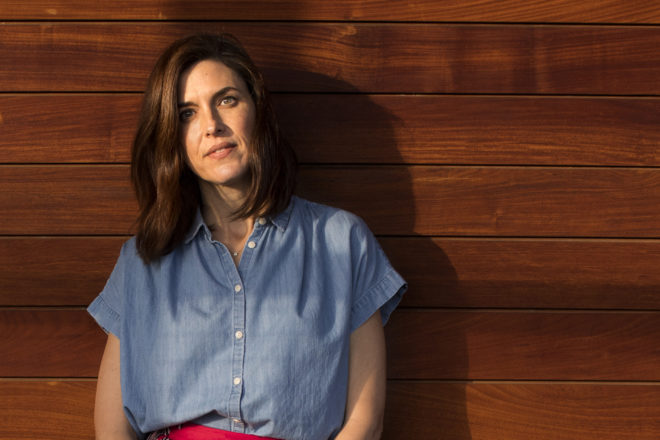 Poet and author Carrie Fountain to speak at Write On, Door County Gala

It’s a tricky summer in Austin, Texas, said poet and author Carrie Fountain, speaking by phone last week. This year, there hasn’t been rain since May. It’s unexpected. Talking with her, though, it seems the Texas resident is used to expecting the unexpected.

In her own words, she is an  “unexpected poet” – but one who has published three books of poetry. Her latest, The Life, was released in 2021. Fountain has also had work published in some of the country’s top publications, including Poetry Magazine, American Poetry Review and The New Yorker.

She was selected as the 2019 poet laureate of Texas, and she has earned numerous honors, including the Marlboro Poetry Prize, the Austin Library Foundation’s Award for Literary Excellence, a residency with the Frank Waters Foundation and Swink magazine’s Award for Emerging Writers. She is the host of “This Is Just to Say,” a radio program and podcast where she has conversations with poets and writers, including Naomi Shihab Nye, Maggie Smith, Jericho Brown and Aimee Nezhukumatathil, to name a few.

Fountain is, to say the least, at the top of her field. And she’s coming to Write On, Door County as the keynote speaker for the organization’s annual gala Sept. 29.

Fountain has written poetry since middle school, but it wasn’t until she took a college poetry-writing workshop that she made a deep connection with the form.

“It has just been something that is still very unexpected to me that I have been given – the experience of writing and reading poetry,” Fountain said. “So my life is kind of just trying to line [up] with that gift, and to meet it and stay with it, and to continue discovering that practice.”

Fountain teaches creative-writing workshops throughout the country and serves as the writer-in-residence at St. Edward’s University, where she advises students who are pursuing a career in writing.

Her own career has not been confined to poetry. Fountain released a young-adult novel in 2018 and is adapting it for the screen, and The Poem Forest, a children’s book, is set to be released in September. It wasn’t out of curiosity or challenge that she turned to these other genres; rather, it was that the ideas presented in those forms.

“Maybe it has to do with the fact that when I was studying writing in graduate school, I was in a multidisciplinary program where we were encouraged to think about and write in other disciplines,” Fountain said. “But I’ve never really felt like I’m a poet and a poet alone.”

Nature was one of the cornerstones in the building and planning of the Writing Center at Write On, Door County. The idea was to “build a center within nature, connecting writing with the land.” This commitment can be seen in the completion of that project and through the extensive trails and programs offered at the 60-acre-center.

It makes sense, then, that the gala committee was drawn to Fountain’s upcoming work, The Poem Forest, which portrays a deep connection between writing and nature. The book tells the story of famed U.S. Poet Laureate W.S. Merwin, who moved to Hawaii, bought a plot of land that was considered a “wasteland” and planted trees every day until a forest bloomed around his home.

Fountain said that although Merwin may not have considered himself an ecologist, it makes sense that he created this forest around him. A daily act of planting is similar to that of daily writing practices, and nurturing the seed of an idea into a fully formed poetry tree. She also notes that this is a great story to share with kids to inspire them to consider what they will leave behind.

The gala committee wanted to tap into this inspiration and worked with the Friends of Gibraltar to arrange for school assemblies during the week of the gala. A field trip for fifth-graders is also planned, during which they will explore the woods and trails at the Writing Center with Sheryl Honig, an educator at The Ridges; and create a book about those experiences with local author Ann Heyse.

Nature and poetry “go hand in hand,” Fountain said, “because in so many ways, poetry is the taking of things in the world and reducing them to something very rich. Writing gives voice to the voiceless things around us, and the environment is one of those things.”

Gala attendees will have the opportunity to chat with Fountain and hear her read from her work.

“I’m very excited to be there – very much looking forward to it,” she said. “As a human being, I am someone who is devoted to place – the idea of place. My place is in New Mexico, where my family’s history is a forever kind of history. I really get the sense that your place is like that, that there’s a sense of exalted beauty.”