Ten years go by in a blink.

One minute I’m in a basement, at midnight, working with my cohorts to pull together what will be the first issue of Door County Living. Next thing I know, it’s 10 years later, and we’re putting our 39th issue to bed – although, now, above ground and in the daylight hours.

Although it seems as if no time at all has passed, my rational mind knows it has to have been 10 years to account for the volumes of stories we’ve shared. In fact, it’s a daunting task to select just nine of those stories to briefly revisit here (one from each completed year of the magazine) considering that, conservatively, we’ve run over 500 of them.

Woefully underrepresented in this retrospective are the pages and pages we’ve dedicated to our peninsula’s artists, characters, epicures, and philanthropists. Also lacking are the voices of the wide variety of talented writers whose words have touched our pages. We intend to dedicate space in future issues to revisiting those stories; in the meantime, we hope you’ll enjoy the memories these selections recall, as well as the new stories to be found ahead. 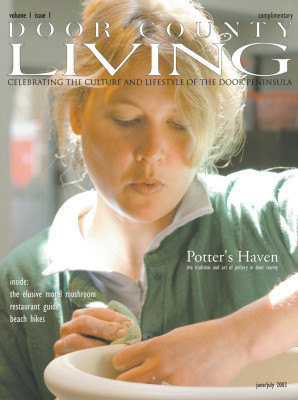 Two o’clock Friday afternoon. I leave the laptop on my desk and it starts to shut down. On my way toward the elevator, I say as few “have a good weekends” as possible because at 2:00 I have no intention of declaring this a half-day, and everyone in the office knows it. The door to the elevator opens, and I feel a great rush of luck wash over me – not one of my superiors is inside…

Once inside the car I call my wife to let her know I’ll be in front of her building in five minutes…She gets in the car, [and] once we hit the highway that takes us north to Door County we are on a mission to get out of the city and surrounding suburbia as quickly as possible.

After nearly a decade of this routine, we were ready for something different. One Sunday in August of 2001, as we were heading back to the city, we hatched an idea that would prove more than fleeting. We would soon become urban expatriates and make Door County our permanent home.

A year has passed, and we are now days from introducing Door County Living. 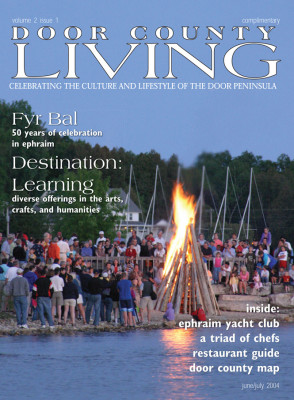 School’s Out:  The Past Times of One-Room School Houses

Buses are the main form of student transport these days, but in the era of one room schoolhouses students commuted to school by walking the roads, cutting through fields, riding horses or buggies or bicycles, and sometimes automobiles and even tractors. The schools were numerous because they were generally located so that students could easily get to class by walking. Karen Stuth Overbeck recalled one of her interesting commutes to Silverdale School. “The snow drifts were so big that my mother drove us to school on a tractor. There were four of us – my brothers and sisters, and mom on the tractor.”

According to Bjorn Johanson (BJ), one of Door County’s most well-established iceboaters, the actual sport of iceboating arose from the ashes of the old trade routes and from modern advances in sailing technology to what it has become today. Predating the gas engine, the sport holds special meaning due to the craftsmanship involved in creating an iceboat vessel and sailing it. “Winter is such a gray time of year,” says BJ with his Australian accent. “We learned how to make do with what we had around us. When you sail with a club there is so much camaraderie. You can make a real great time of it.” 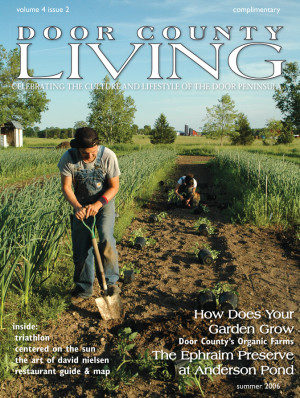 The Ephraim Preserve at Anderson Pond

Recorded history regarding the land comprising the Ephraim Preserve at Anderson Pond begins in 1853, the year that Norwegian missionary Reverend Andreas Iverson arrived at Eagle Harbor. Struck by both the beauty and the potential of the densely forested wilderness, he purchased 425 acres from the United States Government…Once a farm [and later purchased by the Door County Land Trust] it is now a refuge for migrating and nesting birds. Numerous wildflowers bloom there throughout the spring and summer, and magnificent old-growth trees stand on portions of the land that were never cleared. 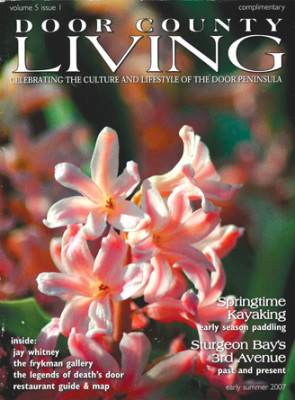 The Legends of Death’s Door:  Crossing Between Fact and Fancy

Despite the numerous variations, or perhaps because of them, the legend and aura surrounding Death’s Door has continued to grow over the years. According to Conan Bryant Eaton, technology has “removed the sting of Death’s Door. But even the most self-assured human must look on with awe when the waterway occasionally shows its fiercest face.” Especially when the wind and water show this fierce face, the Native American legends surrounding Death’s Door resurface, coloring the landscape and adding to the layers that make Door County a unique place. 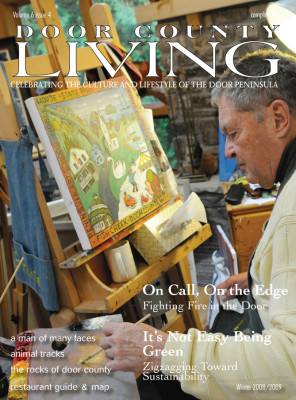 On Call, On the Edge:  Fighting Fire in the Door

“When you’re entering atmospheres that are in excess of 1,000 degrees, you’re living life on the edge,” Caleb Whitney says wryly about his job as a firefighter and company officer for the Baileys Harbor Fire Department. Indeed, the firefighters of northern Door County live on many “edges” simultaneously, straddling the lines between fire and water, firefighter and civilian, safety and danger, on an almost daily basis. 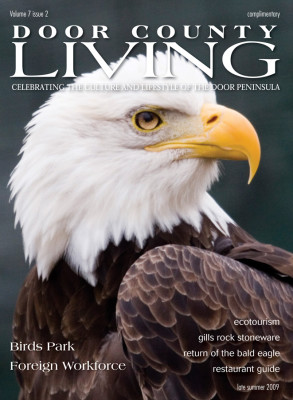 Return of the Bald Eagle

Similar to what had happened in many areas of North America, the eagles had been killed by DDT. Its use as an agricultural chemical had skyrocketed after World War II…By 1972 most uses of DDT in the United States were banned. Along with the passage of the Endangered Species Act, the ban on DDT is cited as a major factor in the excellent comeback of Bald Eagles and Ospreys. There were 1,142 documented Bald Eagle nests in Wisconsin in 2008, up from 25 in 1962. 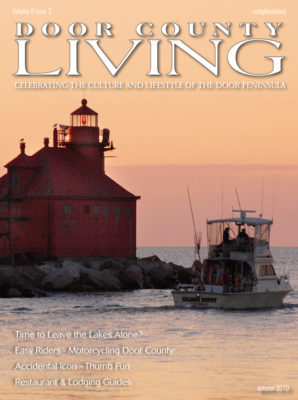 Thumb Fun founder Doug Butchart turned 80 years old this year, but he remains very much the same caricature of the man that he was when Digger DeGroot says he was nicknamed “the Walt Disney of Door County.” His white bushy eyebrows match his thick hair, and a Santa’s belly sits atop matchstick legs. His mind works in tangents, as an ever-rushing flow of ideas takes him darting from one thought to the next. “He’s a total carnie,” DeGroot says. Even today, nearly 12 years after he closed the park, his eyes spark with excitement as he recounts the story of a ride “find” at an auction or a deal that made good. His inflections are still those of a promoter and salesman. 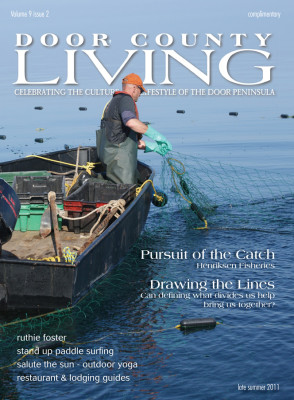 Henriksen Fisheries:  In Timeless Pursuit of the Catch

As The Karen rumbles out from the Henriksen Fisheries dock into Lake Michigan, the late spring sky is beginning to brighten, the air fresh, the water a mirror, but the sun is sleeping in.

“I tell my crew that tourists pay lots of money to see something like this,” Charlie Henriksen says. But the crew, one man reclining on a pile of nets and the other sitting on a gunnel, aren’t admiring scenery; they are resting, knowing that when the boat arrives at the channel bank they’ll be busy setting trap nets for whitefish.