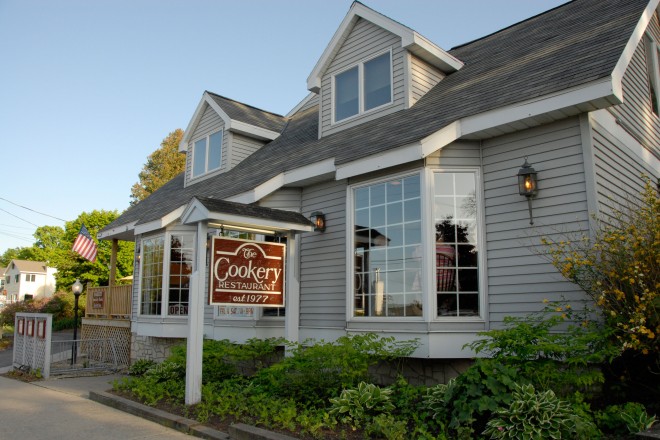 It took their honeymoon for Carol and Dick Skare to realize they could fall in love all over again. But this time, it was with an idea – to open a restaurant in Door County.

The beginnings of The Cookery restaurant in Fish Creek began as most romantic endeavors do, with a chance meeting. Wanting to explore the quiet peninsula on a chilly day in May of 1977, they entered Hazel Elliot’s Bellaire Gallery Antiques in Sister Bay. After casually conversing with the owner about their dreams to own a restaurant in Minneapolis, Hazel convinced the Skares to investigate the purchase of a local business – the 1,000-square foot Blue Willow Café.

“We tend to do things impulsively,” Carol says. “It just felt right, so we put in an offer during our honeymoon.” The Blue Willow was soon renamed The Cookery. And, after 30 years, the love of the restaurant business hasn’t diminished. “I read, eat and sleep it,” Carol says. “It’s in my blood. It’s a fun passion – I think that it’s exciting.”

The restaurant’s square footage is now over three times the size of the Blue Willow, with seating for 85. From three spacious bay windows, the restaurant’s above-the-street view takes in a handful of cottages and a glimpse of the water beyond. Booths lining the length of one side, walls painted a deep gold and a highly-polished hardwood floor underfoot make for a homey, cozy atmosphere

That atmosphere also reflects the relationships of the employees. The Skare’s daughters, Courtney, 25 and Karin, 22, grew up in the business, with the younger waiting tables again this summer. Carol’s sister, Diana Shay, is general manager and has been with the Skares since their second season. Many of the employees, who now number about 45, have been with The Cookery for over 20 years.

Jan and Andy Coulson, owners of The White Gull Inn, were there to welcome the new restaurateurs to Fish Creek’s business district. The Coulsons had preceded the Skares to the area by five years. Andy says despite any physical changes the Skares have made to the restaurant, the couple continues to maintain its personal touch.

“Like a lot of businesses owned by young people in the 1970s – the season was very short and owners operated on a shoestring by doing everything themselves to create an atmosphere of quality for people coming here,” Coulson says. “That quality of their early success stayed with them. They were able to expand and stay open for more of the year, but they never lost that hands-on approach.”

Dick and Carol have separate areas of expertise. He manages the kitchen while she oversees the dining area and researches recipes. In the early days, Dick worked as cook while Carol waited on tables and baked – every morning.

Coming from a large family of dairy farmers from Albany, Minnesota, Carol says baking is a much-loved family tradition that she has passed on to her daughters. “Every Saturday was my baking day with Mom and I tried to continue it with my girls,” she says. “They’re both great cooks.”

With her background, it may come as a surprise that until Hazel provided a cherry pie recipe, Carol had never made one. “Hazel came over with a fresh-baked cherry pie one day and told us, ‘You’ve got to have this on your menu,’” Carol says. “We always listened to her – cherry pie was our first item.”

With high demand to share her original-recipe caramel rolls, coffee cake and other bakery items, Carol is no longer able to do all the baking herself. She relies on her staff to make these treats to her specifications.

The Skares also have a website, www.cookeryfishcreek.com, which offers Carol’s original recipe jams, chutneys and sauces, many featuring Door County cherries as an ingredient.

Today’s restaurant menu follows the same customer-friendly principles of the early years. “We built the restaurant on our customers’ needs and how they wanted their food prepared,” says Carol. In fact, The Cookery chefs are trained to expect any number of substitutions for special dietary requests.

Open year round, The Cookery offers a full menu for breakfast, lunch and dinner. At lunch, hot open-faced crescent crust sandwiches, salads and soups are featured. At dinner, tried-and-true family recipes for meatloaf and pork tenderloin are favorites. Carol’s cherry crisp is considered the “number one selling dessert.”

In 1995, in keeping with a concern for healthy eating, Carol enlisted the expertise of a dietician from Door County Hospital to review The Cookery’s recipes for heart health. This included the house dressing and pancakes. Most of the menu, including the pancakes, passed the test. The menu makes note of these offerings. Today’s menu also instructs guests in the substitution of ingredients or side dishes to make a meal healthier with “low carb” or “low fat” items.

Judging from the way the Skares speak of their business, their commitment to operating The Cookery won’t end any time soon. “We’re here and active in the business and we care about our customers – that’s our personal focus,” Dick says.

Carol agrees – this is a love that lasts. “If the place were to sell, I’d come with it part time and be part of the sale,” she says. “I’ll be the gray-haired old lady bussing tables. I can’t imagine not being here.”