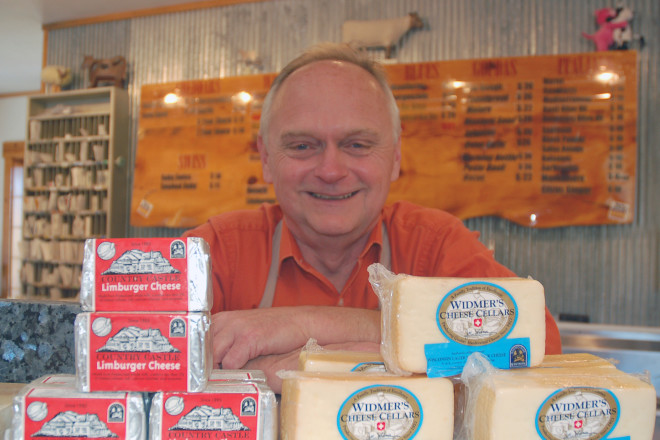 Jim Pionkoski of Wisconsin Cheese Masters in Egg Harbor has created Stinkfest in order to be able to serve two pungent cousin cheeses for the first time since opening his cheese store five years ago. However, he will serve the Limburger and aged brick cheeses outside and is hoping for a good breeze to waft odors away. Photo by Jim Lundstrom.

Stinkfest is the name Jim Pionkoski of Wisconsin Cheese Masters in Egg Harbor is calling a special cheese tasting he will host on Saturday.

This will be the first time in five years of business that he will provide samples to customers of Limburger and its cousin, aged brick, but it will be outdoors instead of inside the shop, and Pionkoski is hoping for a good breeze that day.

“It’s kind of sad when people want to come in and try Limburger. We just can’t open it in the store,” he said. “The smell lingers and ruins the experience for the other cheeses. We have been selling Limburger and aged brick since we opened five years ago, and we are getting more and more requests to sample it. So it has become time to do an event so people can try it.”

Along with aged brick from Widmer’s, Pionkoski will serve Limburger from the only Limburger cheesemaker in America, Chalet Cheese Co-op of Monroe, Wis. 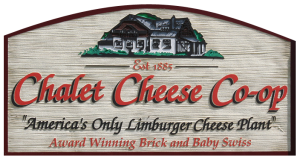 “Our Limburger is produced by the only Limburger maker in the U.S. In the 1900s, there were 600 Limburger factories in Wisconsin alone,” Pionkoski said.

And all that U.S. Limburger production is overseen by Myron Olson, the only Limburger master cheesemaker in America.

“I went and met Myron when I started the business in 2008. He was the first guy I talked to, a real nice guy,” Pionkoski said. “He knows that it’s a responsibility. It’s a difficult cheese to make. First of all, the aroma. You have to have a dedicated area. It’s a smear-ripened cheese, so there’s a technique for that. Because he’s the only one left, he’s got a lot of pressure to continue doing it.”

“I tell my wife I’m one of a kind, but every Thursday she says, ‘Garbage out yet?’,” said Olson, the master Limburger maker of the Cheese Chalet Co-op.

“Limburger did have a good history back in the early 1900s. It was one of your top cheeses,” Olson said. “Green County down here was known as the Swiss cheese capital of the U.S. They’d make nine million pounds of Swiss, and at the same time there was four million pounds of Limburger being made.”

Today, Olson makes 600,000 pounds of Limburger cheese a year, “and that’s enough for the whole country,” he said.

Despite the precipitous drop in production, Olson believes Limburger will always have a place in the world of cheese.

“It has dropped, but it’s a good, strong following that you have,” he said. “They might be 76 years old, but they’ll swim a river, climb a mountain to get to Limburger. They are dedicated. Limburger seems to stay pretty steady. Ones that are leaving us, there are always some that take their place.”

Olson said Limburger and other strong cheeses have a rich tradition.

“Just about every country in Europe has what I call the ‘stinky cheese’,” he said. “It’s got the flavor. It’s what we call the washed-rind cheese, and a surface ripened washed-rind cheese. Generally it’s a bacteria that’s placed on the surface. That bacteria breaks the cheese down and takes it from a firm cheese to a soft cheese. The bacteria also adds flavor, and, unfortunately, it adds aroma to it. Limburger was always considered healthy, good for the intestinal flora. Like we have Activia now, this was the probiotics of years past, that type of cheese. Every country has a cheese that’s like this, so there’s always been a following for this type of cheese.”

While Olson and Chalet Cheese Co-op are the only Limburger makers, he said others are making stinky washed-rind cheeses.

“A lot of artisan cheesemakers are making this type of cheese now, but they don’t call it Limburger,” he said. “People have heard all the stories about Limburger and expect the worst. But if you give it a different name, St. Michael’s Reserve, this is washed-rind, caved-cured cheese, specially made for you, would you try it?”

People are trying it and liking it.

“People are buying it,” Olson said. “In Wisconsin, that’s one of your biggest growth areas, specialty cheese.”

Because of that, Olson said, “Europeans don’t have that edge on us anymore.”

Besides the bad rap Limburger has gotten in popular culture (you can look that up), what else has contributed to Limburger’s low rung on the totem pole of cheese? Since Myron Olson probably thinks about Limburger more than anyone else on this part of the planet, it seemed right to ask him.

“When you look at it, Prohibition kind of put the damper on it because a lot of Limburger was sold at taverns as sandwiches with beer,” he said.

People’s tastes changed after the 13-year Prohibition on Limburger and beer.

“As people’s tastes tapered off, we got packaging and cheese got younger and younger,” Olson said. “People got used to milder flavors, pretty soon it was cheddar, Munster, Swiss and Colby that were your popular cheeses.”

And, finally, corporate indifference to this traditional cheese was another blow to Limburger.

Olson said when he started working at the Cheese Chalet Co-op as a 17-year-old in 1970, Kraft was the premiere cheesemaker in the country.

“In 1972, Kraft closed their last plant in New York state and brought all the production here,” Olson said. “Pretty much from 1972 on, we were the Limburger maker for the United States. Back then we used to make close to two million pounds of Limburger a year.”

“When the cigarette company took over, it became more of how much margin can we make off a product?” Olson said.

“About 10, 12 years ago, Kraft Foods decided – they were still buying about 600,000 pounds of Limburger from us but decided it was too small a quantity. So we had a big change because all of a sudden, here’s our biggest customer with distribution throughout the country, and they said, ‘What’s in the coolers we’ll take and then we’re done with Limburger.’”

Kraft may be done with Limburger, but Olson and the Cheese Chalet are not. He said Limburger makes up 20 percent of the plant’s production, with baby Swiss and brick making up the rest.

“We’re a small farmers’ co-op. We’ve been in operation since 1885. We saw Limburger was slowing down in the late ’70s, so we got into making baby Swiss. If you’ve ever seen Deppeler Baby Swiss out there, that is ours. A lot of it is private label.

“As far as the co-op, the farmers own the business, 19 farms, all Green County. All small farms, father/son operations,” Olson said. “We like to think what makes our cheese special, more than 30 percent is Brown Swiss and the rest Holstein.”

Stinkfest runs from 1 to 3 pm Saturday, Sept. 26, at Wisconsin Cheese Masters, Hwy. 42 at the top of the hill south of the Village of Egg Harbor.