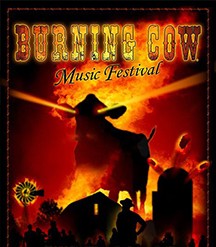 You’ve heard of Burning Man, a weeklong festival that takes place in the Nevada desert around Labor Day. The culmination of the fest is the burning of a wooden man.

Max Wilkinson, vice president of Funny Farm Productions, said the Wisconsin production company has been wanting to put on its own Burning Man-style fest for a few years now, but with a Wisconsin twist, so welcome to the Burning Cow Music Festival, which takes place July 23-25 on the grounds of the Door Devils Motorcycle Club at 4780 Mathey Road, Sturgeon Bay.

“We had a site in northern Wisconsin that fell through two years in a row,” Wilkinson said. “A friend in our Funny Farm network approached us and said, ‘My father-in-law is in the Door Devils Motorcycle Club. They have this huge club grounds and they want to do something.’ They were on board with what we were trying to present and they’ve been incredibly gracious and are helping to clean up the club grounds. This is a really nice site. It’s more than 40 acres, a nice field, not a hay field, so people can walk around barefoot.”

Wilkinson said a team is in the process of building the epic 25-foot cow that will be torched to end the festival on the 25th.

“It’s going to have telephone pole legs, a torso of plywood and two by fours. We’ll be decorating it a little bit more to give it a different aesthetic,” he said. “The idea being that Wisconsin kind of has a cultural tie to the cow, so we decided to run with that as the festival feature, the thing that will be the standout item of the festival, this giant cow that will be overlooking the crowd, and then burning it down on Saturday night.”

Wilkinson said Funny Farm has been working since November to put together an intriguing music lineup.

“We wanted to bring something people haven’t heard before, something independent that’s not incredibly popular, but people will leave saying, ‘Wow, so glad I checked them out,’” Wilkinson said. “Because it’s a first-year event, we’ve had so many more bands decline our offers than accept, but we’re incredibly fortunate to get the bands we do have. These bands are incredibly talented, they’re solid rock, great guitar players, great blues players and singers, the kind of thing Door County can support.”

Asked if there is one act that should not be missed, Wilkinson didn’t hesitate to name blues rocker Anthony Gomes.

“I’m incredibly excited for Anthony Gomes,” he said. “It’s crazy that it came together, and it only came together in the last six to eight weeks, that he would be willing and able to play our festival. He’s got 13 songs on his new album, Electric Field Holler, that are on the billboard blues rock top 100. That’s his entire album. That’s impressive. I’m also really excited about John the Conqueror (from Philadelphia). They’ve got this really great blues rock sound. The vocalist has a deep, gravelly voice. It calls home to me. I love the blues sound. I’m really excited to see them.”

He also mentions the Irish band The Answer.

“They are probably our hardest rock band. We’ve been comparing them to Dio. They really go heavy on the hair metal. They’re all longhaired Irish guys and really solid rockers. We hope we have a good turnout Friday night because they’re solid,” Wilkinson said.

He also mentions the Winnipeg band The Revival. “I had the opportunity to see The Revival in Green Bay. They really put together a good show. They have a lot of energy and bring a great stage presence. We’ve been comparing them to Led Zeppelin. The vocalist pours himself into every song.”

“They’re our Saturday night headliner, kind of that southern rock sound,” Wilkinson said. “They have solid tunes that have been on a few TV shows. They have a couple songs on Sons of Anarchy, so it kind of fits the bill with it being hosted by the Door Devil Motorcycle Club. I think they’re just really fun to listen to.”

Wilkinson said Funny Farm Productions has big plans for the future of this festival.

“The club has tentatively agreed to do this for the next two years after this one, so hopefully we’ll have three years to get this up and running so we have a return crowd every year,” he said.