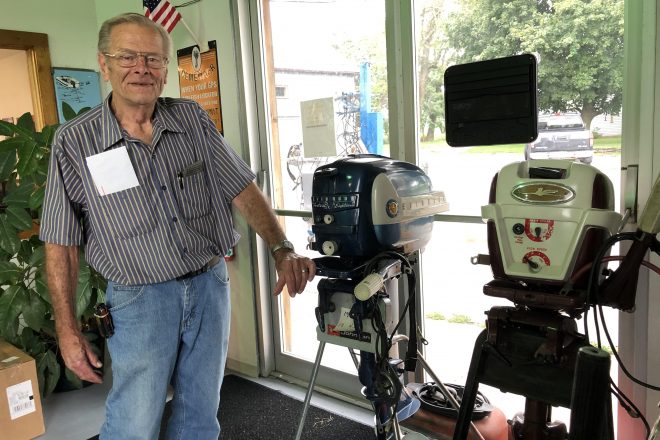 Charlie Corcoran still has some restored antique outboards for sale and on display at Corcoran Marine. Photo by Craig Sterrett.

It may seem odd to find a large boat business and outboard motor shop several miles from any body of water. To customers and employees of Charlie Corcoran, it will be even more strange to see a “Closed” sign on Corcoran Marine between Sturgeon Bay and Brussels on Highway 57.

He’s decided to retire after 41 years of operating the shop that he bought after accumulating a wealth of knowledge working as a mechanic since 1964.

Corcoran said people told him his business would go unnoticed and fail in its landlocked location at least eight miles from the bay of Green Bay to the west and a little farther to Lake Michigan to the east. But he and his fellow mechanics always had plenty of work to keep them busy and paid.

“A lot of people said, ‘You’re never going to do it. You’re living out in cow country. That’s too far away,’” Corcoran recalled. “Forty-one years later, I’m still here.”

Through the years, he and his mechanics, including Don Hunt and Steve Lenius, built a reputation for their repair work and for sharing repair information with do-it-yourselfers. Corcoran is proud of his long career working on boats and outboard motors, and none of it would have worked out if he hadn’t taken some risks and built a big showroom.

“I don’t miss the boat and motor sales at all,” he said. “I was real competitive and didn’t make much on boats. I think I got the Evinrude franchise in about ’81, and I went to the bank, and the interest on a loan for floor planning was 22.5%.”

He said the banker did not see how he’d make a profit on boat sales with that loan, but Corcoran had his eyes on the long-term prize: becoming the local, certified parts and service dealer for Evinrude and Johnson outboard motors and Mercruiser stern-drive engines. Like Ford and Mercury automobiles of the 1980s, Evinrude and Johnson had interchangeable parts.

Corcoran said he sold a lot of boats at cost so he could establish a reputation; gain customers for mechanical work, storage and service; and build recognition with the corporation as a quality dealer and mechanic. He built enough credibility that when Outboard Marine, the parent company of Evinrude and Johnson, went bankrupt in 2000, the conglomerate that took over those lines kept him as a certified parts and service location.

When Corcoran closes the mechanic and parts business at the end of this season, he’ll honor this year’s storage deals that he’s worked out with customers. After that, he’s not sure what will happen with the stock and supplies.

Hunt is retired, but occasionally Corcoran asks him to help. Lenius will work on boats and motors at his home, which he had already been doing.

“I’ll have to come over and talk to Charlie in his retirement,” Lenius said.

In addition to Lenius, who also works on Mercury products, Corcoran said he believes the nearest mechanics for old Evinrude and Johnson motors are in Luxemburg.

As for Corcoran, he plans to take his RV and pontoon boat out more often. He also wants to use his shop space for working on his antique cars and other hobbies, such as restoring and repainting mid-century outboard motors.

“I like the stuff from the ’50s. They had some character to them,” he said while standing next to a metallic, light-green Johnson outboard with white, space-aged-style trim that served no purpose other than looking good.

“Nowadays, everything’s like an eggshell with a decal on it,” Corcoran said. “You can’t tell them apart.”

In addition to looking different on the outside, the older outboards –  especially those from the 1930s – didn’t always look similar to one another on the inside.

“They were in the beginning stages of making things work, so they have a lot of different systems in them,” he said while talking about a tiny Muncie engine that he and Lenius restored for a customer.

Corcoran started working on some of those old engines at a very young age.

“I’ve been mechanically inclined all my life,” he said. “My dad used to help me take stuff apart when I was a kid, and then he’d disappear and I had to put it back together.”

Corcoran got started working on Evinrude motors at Norm Knutson’s shop in Sturgeon Bay in 1964, and then Corcoran’s brother, Larry, bought the business. Corcoran worked for his brother until Larry sold the place in the early 1970s while Corcoran was in the Army as a Pershing missile crewman. He then worked for several other dealers in Door County and Green Bay, and when he decided to strike out on his own, he bought an old farm along Highway 57 and worked days at Peterson Builders to raise cash for his business.

“Everything comes to an end sooner or later,” Corcoran said. “I made a lot of good friends and a lot of good customers over the years.”