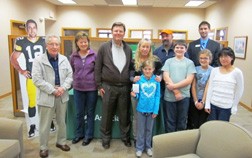 A presentation was made to Bo Johnson’s mother, Annika Johnson, at the Associated Bank in Sister Bay for the Go Bo Fund in the amount of $5,321 from Stella Maris Parish. Funds were raised by the Stella Maris Faith Formation Youth Group and from parishioners’ contributions. 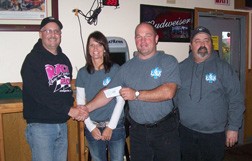 (Left to right) Brian Kenzik of R.A.C. E. presents the donation to Jodi Greip, Joe Spude and Mike Renard of the Brussels EMR.

Brian Kenzik of R.A.C.E presented checks of $273 to B.U.G. and the Brussels EMR.