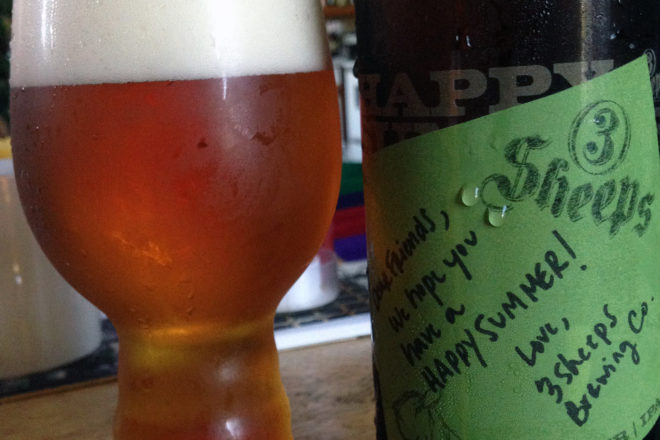 I think of Ridley Scott every time I have a 3 Sheeps beer.

Why? Because 3 Sheeps somehow reminds me of Philip K. Dick’s 1968 novel Do Androids Dream of Electric Sheep?, which is the basis for Ridley Scott’s 1982 film Blade Runner, which made me a Ridley Scott fan. The Duellists set the tone, and then Blade Runner came along – a mash-up of film noir and sci-fi. Scott is currently executive producer of the amusing CBS political satire BrainDead.

What does all this have to do with beer? Nothing. It’s that sheep thing.

The fruitiness of 3 Sheeps First Kiss Imperial India Pale Ale with Honey begins with the pour. The lovely fruit aroma – not any specific fruit, just fruitiness incarnate – makes you want to dig in.

This is one of those rare beers that is so delicious, after each sip you want another.

And it’s chewable. The honey puts this IPA in another palce. I mean place.

From there I went on to 3 Sheeps Happy Summer India Pale Ale, which is brewed with three hop varieties – Amarillo, Citra and Mosaic. There’s a big tropical fruity smell to this golden IPA. It looks absolutely delicious, so let’s dive in…

Whoops! I should have started with this one first, because First Kiss is a great and beautifully balanced IPA and all I’m getting from Happy Summer is hop juice. Ugga wugga! Hope my plants are thirsty.