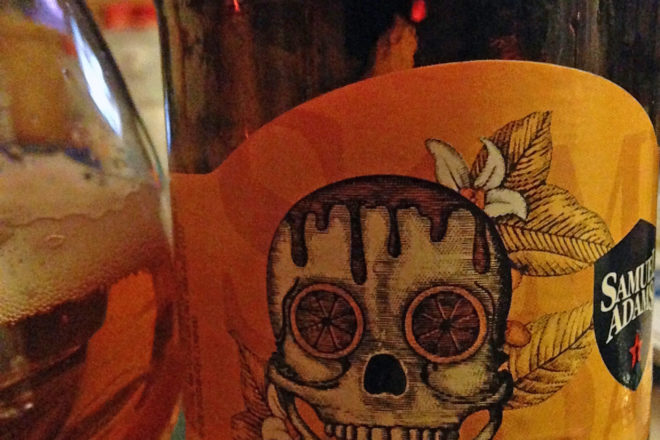 I was in need of a nice, soft lager when my eyes were caught by a grinning skull dripping with something. And then the cheeky name – Fresh As Helles. By Samuel Adams?

There was a time in another century when finding a bar that served Samuel Adams Boston Lager in the bottle or, even better, on tap was a very wonderful thing. It was a beer to be savored. Jim Koch was a superstar in my book, one of the early innovators in the craft beer evolution/revolution.

And then, suddenly, there were so many more choices – so many beers, so little time. But you soldier on, sometimes forgetting the early ones who served as oases in the desert of homogenous American lagers.

So, damn right I’m going to pick up a sixer of Fresh As Helles, a lager brewed with orange blossom. I guess that’s what’s dripping off the top of the skull? Oh, and now I see that its eyes are round slices of orange.

I don’t understand the marketing concept of skulls, but it worked on me, so shut up and drink!

I get a pleasant, slightly floral aroma. It is the nice, soft lager I was looking for, with a subtle final high citrusy tang that seems to elevate the roof of the mouth and put all the taste sensors on high alert. Yes, definitely a puckering finish, but relatively subtle and not exactly sour. It’s more of a dry pucker. Alum comes to mind.

But perhaps I’m being hypersensitive. The sensations I’m feeling are nowhere near as dramatic as sucking on alum crystals, and to imply such impugns the nature of this beer.

It went well with my meal of baked Brussels sprouts and red grapes. I went nuts with the cracked black pepper on the sprouts and grapes, setting my tongue on fire. Fresh As Helles is a happy antidote, or at least it puts a damper on the peppery assault. 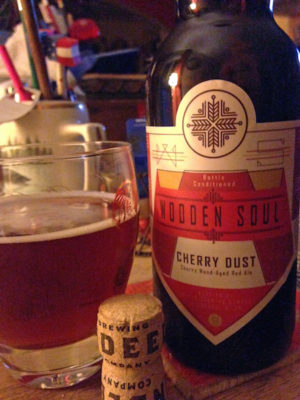 Bright cherry filled the air as soon as the cork popped on the bottle of Wooden Soul Cherry Dust, a cherry wood-aged red ale from Indeed Brewing of Minneapolis.

This is an amazing soulful sour. Each barrel of beer is infused with 44 pounds of tart cherries, which explains both the cherry aroma after the cork pop as well as the big tart cherry flavor with a citrus twist at the end. Just the slightest hint of spiciness underneath it all – cinnamon, maybe?

Each sip is better than the previous one, which makes you wish there was more than a single 12.68-ounce bottle. But, of course, there is not.

Well, I just took the last heavenly sip. Is there really anything more to say or do? It is a perfect beer. Indeed! 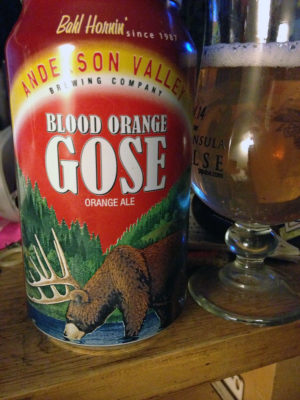 A reach into the magic fridge reveals another sour – Blood Orange Gose from Anderson Valley Brewing of Boonville, Calif.

This one pours a pretty orange color. There’s a definite hint of orange in the aroma, as well as in the bright sour taste. This is only mildly sour, with a second subtle wave of saltiness, which, of course, is traditional with Gose, a beer first developed from the highly saline waters in the central German town of Goslar.

The saltiness here is on the low end of Gose beers I’ve had. At 4.2 percent, Blood Orange Gose makes for a delicious and refreshing sour that should not offend those afraid of sours.