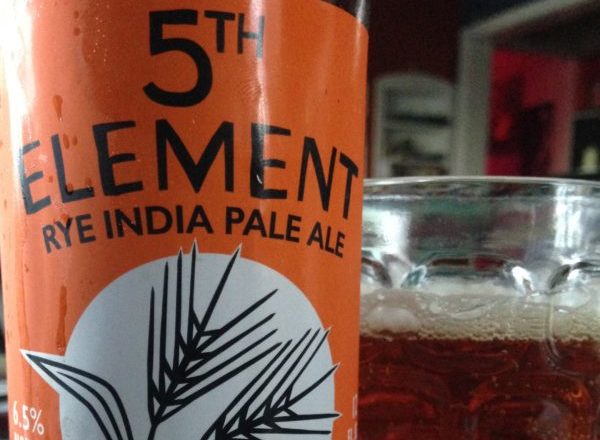 Rumor has it that One Barrel Brewing of Madison is moving to my village of 200 folks, right next to the new distillery that opens next month. Well, it’s more than a rumor. Owner Peter Gentry expects to close on the building any day now.

So, it’s time for me to get to know One Barrel beers, and why not start with a rye beer? In this case, 5th Element Rye India Pale Ale.

Here is what I can say for certain – this 6.5 percent IPA is a fully loaded punch in the palate.

Why rye? Rye not?

Honestly, it must be my Finlander heritage. The taste of rye is part of me. Forget the Swedish limpa-wristed rye. Give me dark, dark rye. Pumpernickel. Big, bold black rye. With or without caraway seeds.

In beer, rye adds a spicy darkness flavor profile absent from most other traditional brewing grains.

My first taste of 5th Element, I was ready to pan this beer. Then I gave myself a quick metaphorical slap in the face, tasted it again, and understood.

And that is the moral of this week’s story – do not carry prejudices to a tasting. Or, if you do, know them and try to be bigger than them.

As you might know, I am not a fan of American IPAs. I am, however, a huge fan of British pales ales and IPAs – the balance of ingredients is breathtaking.

In contrast, many American IPAs seem brutish and stupid, confidently overbearing in hops, and culturally ignorant of balance.

And, so, my first sip of this beer I was overwhelmed by the raw hoppiness.

But, I asked myself, is that really it? Isn’t there more going on here? C’mon, dive in!

Then I took another sip and, yes, there’s the rye, a spicy prize working within the larger presence of hops.

Are these flavors competing or working in tandem? I can’t decide.

One sip says yes. The next says no.

So unpredictable. And that’s kind of nice.