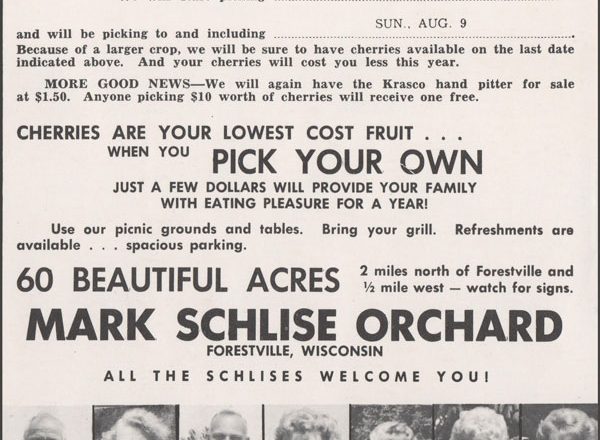 If the Town of Forestville doesn’t immediately pop up in connection with Door County’s cherry industry, Julie Schmelzer may succeed in changing that.

As the director of business development for the Door County Economic Development Corporation (DCEDC), Schmelzer submitted an application to the Smithsonian Institution – the world’s largest museum, education and research complex – that it plucked from among the bunch of submissions. As a result, the story of cherry-industry innovations from the Town of Forestville will be part of a Smithsonian traveling exhibit that will tour the nation from 2023 to 2029 as part of its Museum on Main Street program.

The heart of the exhibit – Spark! Places of Innovation – is content from diverse, rural communities such as Forestville across the nation. The stories explore the unique combinations of places, people and circumstances that have fostered innovation and invention in rural towns.

“I immediately realized that being part of a national exhibit that traveled the country could be a good tool to attract investment in a community, so I started researching the roots, literally, [of] our cherry industry and found there were several ties to the Forestville area,” Schmelzer said.

One cherry-related Forestville innovator for more than 30 years is Country Ovens, the maker of dried-cherry and Cherry DeLite products. Owners Mike and Kathy Johnson continue to innovate.

“‘Innovative’ means buying whey from dairy farmers and inserting it into the cherry juice you already manufacture and have for more than 30 years,” Schmelzer said when discussing the company’s recovery drink for athletes called Red Whey. It’s made from 100% tart-cherry juice infused with 12 grams of whey protein.

While researching the history of Door County cherries, she learned that the Great Fires of 1871 had wiped out the once-thriving timber industry in the Forestville area.

“Lots of sawmills, lots of forest, and then the fire wiped it all out,” Schmelzer said. “They were standing there kicking the dirt afterward, wondering, ‘What will happen on this rock? What will grow on this rock?’”

As it turns out, cherries grow well on limestone.

But the DCEDC is not a historical society. Rather, Schmelzer was looking for stories from the past that would spark future innovation, just as the traveling exhibit is intended.

“I found in Japan and India and Argentina, they’re using cherry pits for insulation, in grating tiles, to clean water – all these uses we don’t use in the United States,” she said.

When she shared these uses with her father, who grew up in Forestville and knew all the stories, he said, “You sound just like Mark Schlise.” Schlise (1896-1991), owner of Melody Cherry Orchard in Forestville, had created a gravity-fed belt on his hill to process his cherries when everyone else was using conveyor belts.

“It was pretty creative,” Schmelzer said. “He dreamed up the cherry pitter, too. He met a Chicago tourist who designed and patented it and built it for Mark, and then he got C & S Company [in Sturgeon Bay] to make it.”

The DCEDC is hoping that, by proxy, the traveling Smithsonian exhibit will attract attention for investment in all of Door County, and perhaps specifically in the Forestville area.

“Forestville hasn’t had any development in a long time, and there are places like Maplewood that have beautiful old architecture,” Schmelzer said. “We believe if we can bring attention to these diamonds in the rough, we can attract investment.”