All of the public comments made at the council meeting were in favor of two-way traffic on Third Avenue, a majority were business owners who touted the financial increases they have seen in their stores because of two-way traffic.

Wilkins and Olander owner Carol Overland said she has experienced a large increase in business this summer with the change to two-way traffic. She said the benefits of Third Avenue business owners doing well extend to the rest of the community. 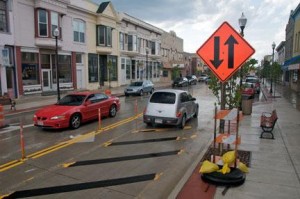 Birmingham was the lone voice in opposition to two-way traffic.

“I think this is the worst possible time to make these changes while one of our main artery bridges is inoperable,” Birmingham said.

City Engineer Tony Depies told the council Tuesday night that the sign and minor construction changes needed to make permanent changes to Third Avenue to accommodate two-way traffic would cost the city about $35,000. Depies said the $9,500 needed for sign changes and installation is available in the city’s budget this year. The other $25,000 needed to remove a concrete bump out would have to be designated in the city’s 2010 budget.

A majority (about 75 percent) of Third Avenue business owners and operators were in favor of keeping traffic flowing north and south, according to Terry Ullman, owner of Copper Kettle Confections. He is one of a group of concerned Third Avenue business owners who circulated petitions and met regularly with city staff and aldermen on the issue of keeping traffic on Third Avenue flowing in two-directions. He said the two-way traffic has helped his business.

“My July sales were up 30 percent from 2008,” Ullman said, “and August was a 20 percent increase. In this economy, that’s a wow. A business across the street from me said his business was up 11 percent. The street is safer for pedestrians now with more stops signs. Traffic has slowed down, and with traffic in opposite directions, there’s no space for drag racing.”

Ullman said parking has been at a premium this summer, which encourages visitors to grab a spot and then walk around the downtown area.

“As a shopkeeper, I look at that as a good thing,” Ullman said.

“The safety issues brought before us the first time around are now unfounded,” Abeyta said, referring to concerns about pedestrian safety, traffic congestion and snow removal issues. “Merchants who were against it have changed their opinions. Snow removal is the worst reason we could find to be against it.”

Third Avenue traffic was last changed from two-way to one-way in the early 1970s due to busier shipyards and the use of only one bridge to the downtown area.

“We’re experiencing good times here on Third Avenue in a bad economy,” Saurer said. “When we do good, (the city does) good. I employ five part time people, and they all live in Sturgeon Bay and spend their money here.“