For the past week I’ve been wondering why my Irish ancestors settled here, why I’ve decided to stay. I’m experiencing bone-chilling cold like I haven’t felt since I spent a December weekend in Norway.

Bottom line – I was looking for a little camaraderie during the recent Deep Freeze of 2014. Sometimes it’s nice to know you’re not alone…and it could be a lot worse: 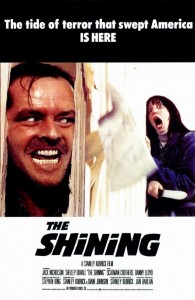 • You could be going cabin fever crazy…

The Shining (1980): Confession – I have never seen The Shining start to finish. But I have seen enough snippets throughout my lifetime to piece together the famous film…and it’s terrifying, like man-goes-cabin-fever-crazy-in-a-haunted-Colorado-hotel-shut-down-for-winter crazy.

A tsunami of blood pours out from a elevator, a kid gets possessed and repeats ‘redrum’ to his horrified mother, who locks herself in a bathroom in attempts to escape her psycho, murderous husband, who grabs an axe and starts chopping down the door: ‘Here’s Johnny!’ Room 237. Need I say more? Oh yes, it’s bitter cold outside.

Favorite Cold Weather Quote: “Some places are like people: some shine and some don’t.” 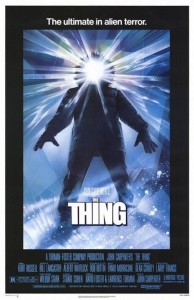 • Your friend could actually be a thawed out alien…

The Thing (1982): Something strange is happening at the National Science Institute Station in Antarctica. Thank goodness beefy and bearded Kurt Russell is there to investigate the eerie happenings – like fleshy tentacles popping out of a stray husky, frozen two-headed corpses of Norwegian scientists strewn about a neighboring research station, and the discovery of a buried saucer the station’s geologist guesses is more than 100,000 years old.

The flick is genuinely terrifying and disturbing, though the over-the-top and dated effects provide comedy relief viewers in the ‘80s would not have found very funny at the time.

Favorite Cold Weather Quote: “Thousands of years ago it crashes, and this thing…gets thrown out, or crawls out, and it ends up freezing in the ice.” 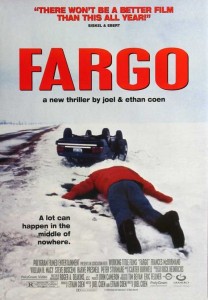 • You could live in Fargo…

Fargo (1996): We all have relatives, friends, or acquaintances with Midwest accents as thick as those in Fargo. The bloody plot, featuring embezzlement, kidnapping, and murder after murder, is not as pleasant or funny as most of the flick’s characters, especially Marge, who delivers some of the best one liners: “I’m doing really super there, thanks.”

And you can feel the chill of a North Dakota winter from the television screen.