Tired of winter? Bored with sitting in front of the TV every night of the week? Let Copper Box help you forget about deadlines and stress with some down-home fun and musical talent. This unique and talented group blends roots rock, polka, and a healthy taste of Zydeco for their “squeeze box rock” sound. It’s guaranteed to lift you up. One performance is scheduled at Third Avenue Playhouse on Saturday, February 2 at 7:30 pm. 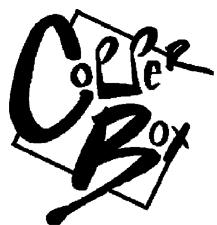 Performing around the country, Copper Box stirs up audiences with their upbeat show and unique arrangements. The term “unique” has been used a million times to describe bands, but seriously – how else would you describe “The Pink Floyd Polka?”

Frontman Danny Jerabek is often called “the Jimi Hendrix of the accordion.” He received his first 3-row button accordion, commonly referred to as the “button box,” from his grandfather when he was 9 years of age. Inspired first by his grandfather and later by Don Cialkoszewski (“The Polish Kid”), the great Steve “Esteban” Jordan, Danny Jerabek has made a name for himself in the world of accordion greats.

Danny shares lead vocals with his other half, Michelle Jerabek (saxophones, guitar, flute), whose voice has often been described as a Sheryl Crow/Bonnie Raitt mix. The band’s rhythm section consists of Kevin Junemann (bass) and Jason Van Ryzin (drums).

Copper Box has received 4 WAMI (Wisconsin Area Music Industry) nominations in 2005 & 2006. Copper Box filmed a music video for Sony, which received great response at the NAB (National Association for Broadcasting) in Las Vegas, NV and at many other Sony conventions worldwide.

Tickets for Copper Box are $15 for adults, $12 for seniors and students and $8 for children under 12. Tickets are available at the theater box office, 239 N. Third Avenue, Sturgeon Bay, 920.743.1760. Box office hours are 10 am – 3 pm, Monday through Friday and one hour prior to performances. Tickets are also on sale at the Dancing Bear, 13 N. Third Avenue and on-line at http://www.ThirdAvenuePlayhouse.com.