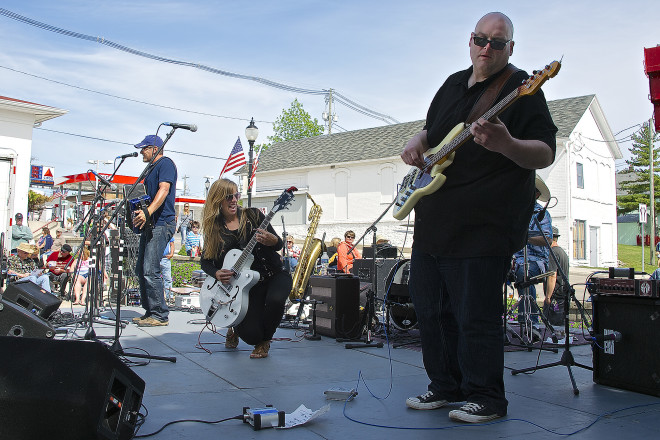 When Judy Drew first heard about the band Copper Box in 2004, her mind couldn’t help but pause when the words accordion and Pink Floyd came up in the same sentence. 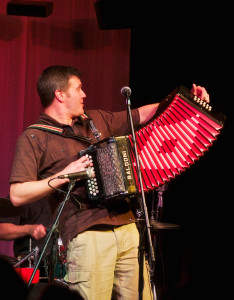 As the executive director of Third Avenue Playhouse at the time, she was charged with building the theater’s audience by bringing family friendly entertainment to its stage. That meant booking local or regional acts that would get the audience up and moving, and coming back for more.

Not having heard a lick of the band’s music, she relied on the Copper Box-promoting theatergoer who showed up that day to describe their sound for her.

Intrigued, Drew took the chance, booking the red-hot powerhouse that is Copper Box for its first gig in Door County.

“They came, they did a concert, we drew a really good crowd that was so into it,” Drew said. “They did in fact play ‘Comfortably Numb,’ brought the house down, but then they just played a mix of Zydeco, covers – one of the things that people still want to hear them play is ‘Born on the Bayou,’ but again, on the accordion. I was in love with them! I was just smitten.”

As it turned out, so was the audience. When Third Avenue Playhouse started a free annual outdoor concert for the community the next year, the first band Drew thought to book was Copper Box. 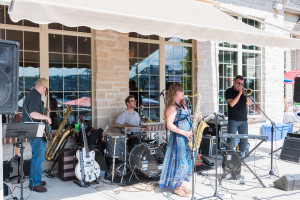 The evening of the show, close to 500 people showed up to hear them play their signature musical fusion of blues, jazz, pop, rock, polka and Americana using an instrumental lineup that included an accordion, cornet, sousaphone, baritone saxophone, guitar, washboard, bass and drums, a majority of which are played by the quartet’s leading members, husband and wife team Danny and Michelle Jerabek.

In the decade since they bathed downtown Sturgeon Bay in their powerhouse sound, the musicality and popularity of Copper Box has only grown. They’ve seen a couple changes in their lineup (which now includes drummer Jason Van Ryzin and guitar/bassist Drew Hicks) but their grasp on bringing the party to the people has remained steadfast.

“We like to try to bring in the people and not only our friends and families and some of the fans that have followed us but tourists that have been in the audience,” Michelle said. “If they see us, we want them to feel like they’re part of a community. Probably the biggest thing at a Copper Box show is we want everyone to feel like they’re included and I think the music lends itself to doing that.”

It certainly does. Whether they are playing their upbeat originals or putting the Copper Box polka twist on covers [their most popular being “The Pink Floyd Polka (Comfortably Numb)”], Copper Box has a command of its audience, bridging the generation gap between senior citizens and children, and pulling in those who ordinarily would not have turned an ear toward the genres they play.

Anyone who has seen the band play will attribute that to the energy of their live performances. Not only are Danny and Michelle talented multi-instrumentalists, they are natural performers whose physicality on stage keeps all eyes on them. 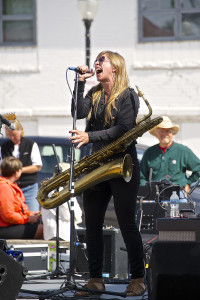 “[Danny] has different sized instruments, but he takes that big accordion and slings that thing around and does things with it that you cannot believe can be done” Drew said. “He’s just a natural performer.”

An accurate statement, given that Danny has been slinging accordions around since the tender age of nine, when his grandpa gave him a squeezebox to play in his family’s polka band. Michelle was also raised in a polka-playing family band. In fact, the two met as children while playing in their respective families’ bands – an upbringing that made the transition to professional musicianship as adults a smooth one.

“We already had experienced being gone every weekend to a polka dance and watched our dads and in my case, my grandfather, and all the aunts and uncles performing onstage together and having a good time,” Michelle recalled. “It just seemed like when we were growing up, it wasn’t, ‘Are you going to play band? What instrument are you going to play?’ It was, ‘Alright, it’s your turn, now show us what you’ve got. What instrument are you playing?’”

Since they branched out on their own in 1997 (first with their polka band Kick and then with Copper Box in 2002), the couple has found solid footing in their musical careers. They have released seven Copper Box albums to rave reviews, performed main stage festivals with the likes of Little River Band, Buckwheat Zydeco, Los Lonely Boys and REO Speedwagon, and garnered a number of impressive awards, including Americana Artist of the Year for the Wisconsin Area Music Industry awards in 2009 and 2012. 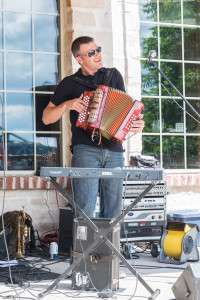 Despite the tremendous growth in the crowds that have come to see them over the years, Copper Box’s love of Wisconsin has kept them touring close to home with the occasional show out East or West. They average 150 shows per year, and with three children now (their youngest was born in April 2015), that seems to be a healthy amount of work for the Jerabeks.

“We love Wisconsin and our family is here … so many people have come up to us and been like, ‘Man, you guys gotta move. Nobody knows you up here! You guys need to branch out more and tour more,’” Michelle said. “We’ll probably always be battling how much to tour and how much to stay in the area. We’re busy and we’re making a living doing something we love so we’re just trying to take it piece by piece, day by day.”