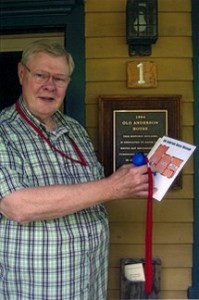 John Fletcher shows off the Corner of the Past’s new Discovery Pen.

The old house at Fieldcrest and Country Lane, just off Highway 57, had been home to a loving family since the late 19th century, but by 1952 the family was long gone, and the house was abandoned. In 1993, the Village of Sister Bay acquired the site and scheduled it for demolition. David Lee, a young teacher at Gibraltar, became interested in it as an historical project and pleaded with the village council to let him undertake the task of saving the dilapidated structure. Lee’s death a year later prompted concerned residents to form the Sister Bay Historical Society to continue the work he had begun. The restored home, the Anderson House Museum, was opened to the public in 1998.

Since then, 13 other buildings from the same period in history have been moved to the location and restored. The Corner of the Past now includes: an outhouse from a nearby farm, believed to be about 100 years old; a summer kitchen more than a century old from the old Knutson farm; the granary original to the Anderson farm; a loom house believed to have originated on the Riley Phylis farm; a preacher’s cabin built in 1884 by Hans Olaf Hanson; a machine shed and an 1887 barn from the Koessl farm; a chicken coop and a blacksmith shop that are replicas of the Andersons’; a pickers’ cabin originally used by migrant workers on the Frank Logerquist farm; two cottages from Liberty Park Lodge; and a 100-year-old sawmill that originally belonged to Hjalmar Holand, noted Door County historian and author. Each of the buildings holds items that would have been used there. The machine shed also has a photo gallery of long-ago businesses in Sister Bay and artistic treatments of ten women important in the village history by Kärin Kopischke, with first-person stories by Patti Podgers.

Thanks to John Fletcher, one of the historical society’s active volunteers, the Corner of the Past now has a voice. A year or so ago, Fletcher saw a demonstration of a Discovery Pen by Julie Frank of Lakeledge Naturalists in Sturgeon Bay. The electronic gadget, which comes from a company in London, will hold 120 hours of taped dialogue. When touched to a sensitized spot, it plays the appropriate recording.

So far, Fletcher has recorded about 90 minutes of material about each room in the house and eight of the outbuildings. The pen can be pointed at a room on a laminated copy of the floor plan of the house, and Fletcher’s voice will describe the room, the items in it and how they were used by the Anderson family. When the pen is touched to a red button at the entrance of the outbuildings, visitors hear the building’s history and a description of the things it holds.

The historical society has done dozens of oral histories of historical Sister Bay persons and their descendants. Sound bites from those recordings are also available by touching white buttons next to the photo exhibits in the machine shed. The historical society owns five of the Discovery Pens that are available for rent for $5 each. As time permits, all of the rest of the buildings will also be prepared for use with the pens.

The Corner of the Past, open 11 am – 3 pm on Friday and Sunday and 9 am – 2 pm on Saturday, is located on the corner of Highway 57 and Fieldcrest Road near Sister Bay. For more information call 920.854.7680 or visit sisterbayhistory.org.