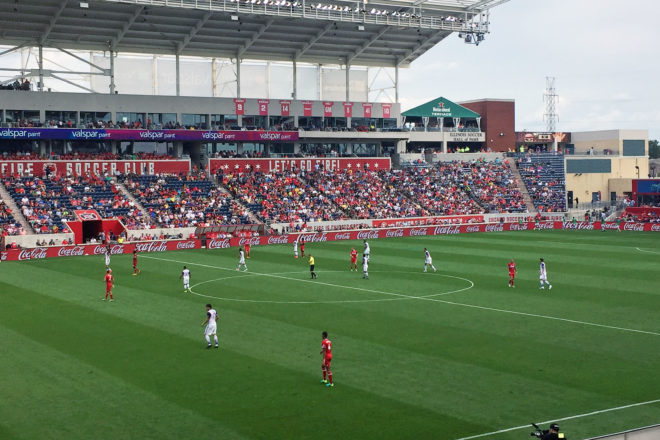 The MLS match between the Chicago Fire and Orlando City SC Lions ended in a 2-2 draw.

Door County residents traveled to Toyota Park in Bridgeview, Ill., on Sunday, Aug. 14, to attend a professional soccer match between the Chicago Fire and the Orlando City Lions.

The City of Sturgeon Bay Parks and Recreation Department organized the community field trip that drew nearly 60 residents to the Major League Soccer match. Babler Bus Service of Door County provided round-trip transportation, leaving at 8:30 am for the afternoon match. The field trip was one of several that are planned by the City of Sturgeon Bay each year. Travelers received discounted rates on transportation and tickets, costing only $50 per person.

With the MLS season two-thirds of the way finished before the start of the postseason, both clubs were pushing for a chance to compete in the MLS Cup Playoffs. The Chicago Fire (4-11-7, 19 pts) and the Orlando City SC Lions (5-6-12, 27 pts) compete in the Eastern Conference. Both teams are in need of late-season victories with hopes of finishing in the top six in their conference to qualify for postseason play.

The energy was electric and the weather was favorable, with kickoff temperatures in the low 80s. Prior to kickoff, fans gathered alongside the stadium to partake in various games that included giveaways from different sponsors. 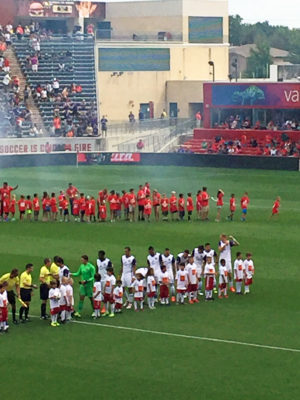 Local Door County youths had the opportunity to participate in the pre-game ceremony, known as the “Tunnel of Fire.”

As part of the match festivities, 12 local children had the opportunity to participate in the pre-game ceremonies, known as the “Tunnel of Fire,” held on the field. Several of the attendees were members of the Door County Soccer Association for the Youth (SAY). The kids participating were able to welcome both professional teams onto the field for introductions and the national anthem while also receiving a Chicago Fire t-shirt.

Sevastopol Middle School student Manav Jandu, 12, was one of the lucky individuals to step out onto the field before the start of the game. Jandu attended the game with his mother, Renuka.

“It was truly an experience to see all the players up close,” he said. “Considering the fact that I have never been to a professional soccer game, this was really fun. I hope to come to another soccer game sometime soon.”

The match got off to a fast start with two goals scored in the first 10 minutes. Chicago opened the scoring in the sixth minute before Orlando City tied the game three minutes later. Orlando City added one more goal before halftime to put the Lions ahead, 2-1.

The second half featured several moments of excitement, none more than Chicago’s equalizer in the 78th minute following a corner-kick. The Lions continued their momentum into stoppage time, threatening to score on several opportunities. In the end, however, the match ended in a 2-2 draw.

“Throughout the entire game, I was always on the edge of my seat,” Jandu said. “Everything seemed unexpected, almost like a thriller.”

He certainly enjoyed the moment Chicago tied the game late.

“I was very excited to see the equalizer, because it was such a clutch play. Overall I had a great experience at the game.”

Following a trip to Miller Park to see the Milwaukee Brewers in action on Aug. 11, the Chicago trip concluded Sturgeon Bay’s summer community field trips hosted by the Parks and Recreation Department.