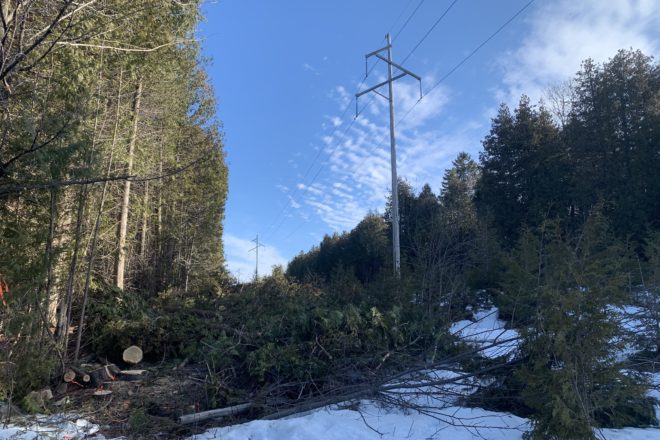 Dale LaViolette rents a handful of vacation cottages on his property about a mile outside the Village of Egg Harbor on County T. Over the years he has planted an assortment of evergreens and sumac to screen the cottages, but now some of those trees will disappear.

The American Transmission Company (ATC) owns a 69-kilovolt (kv) transmission line that runs through the center of LaViolette’s property. With that comes an easement for controlling use and vegetation for 40 feet on either side of the line. Since 1963, that has been done through tree pruning to keep vegetation below 15 feet, but last fall the company notified landowners of a new policy.

According to a letter sent to property owners, ATC is “beginning a more robust approach to vegetation management near its 69-kv facilities by exercising the vegetation rights granted in the easement. This means we may be removing, rather than trimming or pruning trees within the easement strip. We realize this approach is a departure from past practices, but to help ensure safe conditions and reliable electric service, a right-of-way free of incompatible vegetation is an industry best practice.”

For LaViolette, the new approach will reshape his Travel Green-certified property.

“I have a batch of sumacs to shield our property from the neighbors, and they want to clear that out,” he said. “Eight years ago they said to keep them at eight feet, and we’ve done that. But now they’re saying that’s not good enough.”

LaViolette said he offered to prune the trees himself or to hire someone at his own expense, but ATC representatives said no.

“They’re not even interested in talking,” LaViolette said. “There’s no negotiating.”

American Transmission Company owns and operates more than 9,800 miles of transmission lines in the upper Midwest, providing power to more than 5 million customers. Information sent to property owners said property easements give ATC the “legal right to use the property for the specific purpose of constructing, operating and maintaining a transmission line” and “allow ATC to remove trees, incompatible vegetation and other obstacles.”

ATC spokesperson Jody Lau said in an email that work on the 23-mile line that runs from Sister Bay to Dunn Road in Sturgeon Bay will be completed over the next six weeks.

“Pruning and trimming has proven to be an ineffective approach to managing trees in rights-of-way,” Lau said. She said removing trees eliminates tree-related power outages, and that a tree does not need to make contact with a line to create a hazard. “Electricity can arc from the wires to a tree branch, igniting a fire or creating a dangerous electrical path.”

Tony Polish owns property a half mile away and has been notified that the company will cut down several 20- to 30-year-old trees.

“They’ve never cut them before,” he said. “Now they’re kind of signature trees along the property. I guess we don’t have a choice.”

Polish said he’s never had pleasant dealings with the company, calling its representatives rude and arrogant in his 25 years dealing with them.

The company is also seeking to spray herbicide on the land to prevent trees from growing back, but Polish and LaViolette have said no.

“It’s not for our benefit,” Polish said. “It’s for their benefit so they don’t have to come back and spend money again.”

Louis and Elizabeth Sohns said the transmission line has been an issue from the start. The line was originally owned by Wisconsin Public Service, which began building it in 1963 through eminent domain. Sohns wanted to fight the project that would eventually bisect 40 acres of his property in the Town of Gibraltar.

“It spoiled six acres just under the power lines,” Louis Sohns said. “There wasn’t anything I could do about it. They ruined 40 acres of my land. Nobody wants to build a home near power lines.”

Sohns was paid $1,300 when the lines were originally run, but he hasn’t been compensated since. He said he was once told he could plant low-canopy trees and bushes, but when ATC bought the line, it cut them all down.

The original easement gives the line’s owners “the right from time to time to trim or remove such trees as in the judgment of the party” may interfere or endanger the line.

It’s a blanket agreement, but LaViolette said he’s not giving up easily.

“I’ll stand in front of you guys,” he told a representative who visited him. “You’re not cutting on my property.”