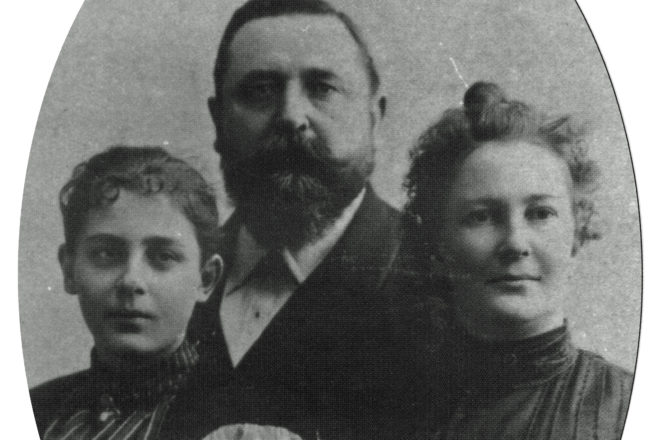 One way to leave a lasting impression on a small village is to build an imposing building in the center of it. Or better yet, find that building far away, drag it across the frozen lake, and reconstruct it where it will stand over 100 years later. This was what Dr. Herman Welcker did in Fish Creek, and the determination that got the hotel (now the Whistling Swan) across the frozen water can be a symbol for what drove this man.

Welcker already had one of the largest resort operations in Door County at the turn of the century when he found the Lumberman’s Hotel in Marinette, Wisconsin. The old building was for sale cheap after the Peshtigo Fire, and Welcker bought it, had it dismantled, and moved it across frozen Green Bay to rebuild it in the center of Fish Creek. Welcker named the hotel the Casino, and it became the centerpiece of his resort. A successful, German-born doctor, Welcker was not always in the tourism industry. And Fish Creek had not always been a tourist destination.

Of course now, in midsummer, it is hard to imagine Fish Creek without tourism. Restaurants, shops and places to stay line Highway 42. Every night promises live music, theater and art, and cars with out-of-state plates crowd Main Street. But just over 100 years ago, only a handful of tourists made the rigorous trek from cities like Milwaukee and Chicago to rough it in the small town where electricity and indoor plumbing were a rarity. Those who did visit came by steamboat on the Goodrich Line, since a road trip to Sturgeon Bay could take a whole day.

Welcker was one of these early visitors, making his first voyage from Milwaukee by steamboat in 1894. He fell in love with Fish Creek the moment he arrived. Unlike earlier settlers, who saw the thick woods along the shore as potential fuel for steamboats, or those who eyed the waters as teeming with herring that they could pack and ship down to the cities, Welcker saw the natural beauty for just that.

“There wasn’t anything like Welcker’s Resort,” when Welcker made that first trip, “except Thorp’s,” says Helen Allen, who was raised in Fish Creek in the early 20th century and who still leads historic tours of the town every summer. Asa Thorp, founder of the village, ran Thorp’s Hotel, but that was the only option for lodging. “When Welcker arrived, he made a huge impact on the town,” says Allen.

“He saw the potential in Fish Creek,” adds Nancy Sargent, Gibraltar Historical Association member. He saw what could be a destination for people like himself, weary of city life and ready to escape in the pristine wilderness. Not long after his first visit, he decided to move to Fish Creek permanently. He began to buy up land at prices we could not dream of today:  miles of shoreline, hundreds of acres of farmland and several dozen lots, all for a few thousand dollars. In 1896, Welcker constructed a hotel (now the White Gull Inn) on his new land and called it the Henriette after his wife. He then built cottages that stretched across several blocks in Fish Creek and eventually moved the Casino, the largest building of all, from its original home in Marinette, Wisconsin. The development of the resort was a 180-degree turn from Welcker’s earlier life. Andy and Jan Coulson, current owners of the White Gull Inn, find Welcker’s story ironic, since it sounds more like it happened in the 1970s or 1980s. “Here he came from Germany with his wife and daughter to practice medicine in Milwaukee,” says Andy Coulson. “Then two years later, presumably having established himself as a successful virologist in his new city, he gave it all up to be an innkeeper in a remote village.” Welcker’s became one of the largest resort operations in the area, accommodating up to 150 guests at a time.

It must have been a sight to the already established families of the village:  someone who was able to come in and acquire that much land. But “Fish Creek was one of these funny little villages,” Sargent says, “and by funny I mean that it continued at its own pace, never changed too much by one group of people.” Allen agrees. “Every year, we would get excited when the hotels were full, because it meant more business for the whole town.” She says that when Welcker was establishing his resort, townspeople “would have viewed his addition as very positive. There was no such thing as overbuilding then.” They may have been in awe of the magnitude of Welcker’s enterprise but, at least then, they welcomed the influx of tourism.

Guests to Dr. Welcker’s resort, however, may have been surprised when they first arrived. “They must have known that they were going to a rural area,” says Sargent, but “they were shocked by the stately, scheduled stay.” Indeed, although only the wealthiest of guests could afford to stay the summer in Welcker’s accommodations, they were under his strict rule during their vacation.

In her essay on Welcker in Fish Creek Voices: An Oral History of a Door County Village, the late Ann Thorp describes “Herr Doktor” as a “Strict disciplinarian, health and fitness enthusiast, gourmet, and lover of art, music and nature; vigorous, stubborn, domineering, frugal and snobbish.” His background in medicine, and his love of the outdoors, inspired him to run the resort in the style of a European health club. Thorp writes of how Welcker would rise guests early in the morning, lead them on a hike, sometimes all the way to Ephraim, feed them three hearty meals a day, and send them to bed by 10:00 pm. Sargent says that “he would throw pebbles at the windows of guests if they were not up in the morning.” Even the casino did not have a purpose as hedonistic as its title might suggest.

Allen says that the casino did have rooms for card-playing, but there were separate rooms for men and women’s games. “He was a European gentleman, and interested in health,” so he emphasized fitness and well-being for his guests. This well-being did include cultural events as well as nutrition and nature. Allen says, “He brought in well-known entertainers from Milwaukee and Chicago.” Most of the perks of the resort were reserved for guests only, but on nights when there were musical performances, people from the town could attend for free. The lobby of the casino was one of the largest rooms in the village, so it became a gathering place. “The same piano that Dr. Welcker put there is still there today,” says Allen.

After Welcker died in 1924, his niece Martha Fahr ran the resort until she died in 1939. Coulson says, “Then Welcker’s domain was split up, with his inns and other properties going to various owners.” Welcker was not the first hotel proprietor in Fish Creek, and after his death his resort empire slowly diminished in size, but it is no doubt that he had an effect on the community as a resort town. The Coulsons still operate the original hotel and several of the surrounding cottages as the White Gull Inn. Just down the street the old casino, run since 2004 by Bill and Michelle Tressler, still serves food and provides lodging as the Whistling Swan. The casino may be Welcker’s most unusual permanent gift to the village. To see the imposing structure, still a centerpiece in downtown Fish Creek, is to understand the magnitude of Welcker’s vision and the pride he had for his resort and for the town. It was on the porch of the casino, writes Thorp, that a hotel patron once saw Welcker “gazing over his resort, and announcing Das ist alles mein!” (This is all mine.)