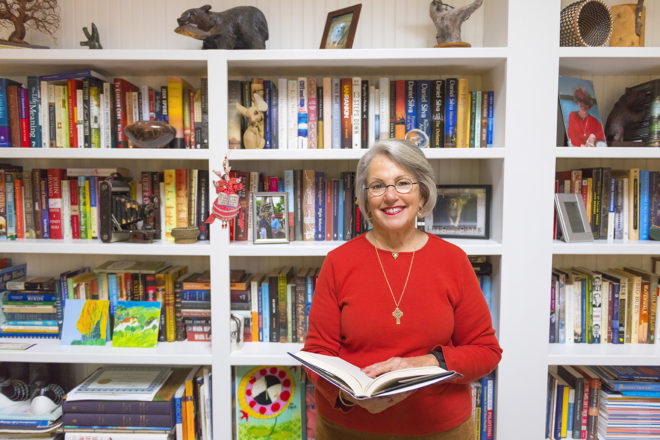 Washington Island Literary Festival founder Helene Meyer started the event in 2013 as a way to bring authors, readers and writers together in an intimate setting. Photo by Len Villano.

Editor’s note: This year marked the fifth of Washington Island’s Literary Festival. Pulse literature writer Carolyn Kane attended the three-day conference, which brought in authors from around the country and was centered on the theme, “Exploring Frontiers, Real & Imagined.”

The Saturday session of Washington Island’s Fifth Annual Literary Festival began last week with breakfast on the patio of the Trueblood Performing Arts Center (TPAC). The participants enjoyed an unseasonably mild breeze as they shared coffee, donuts and fresh fruit. Everyone was chattering enthusiastically, and not a chair was empty.

Among the attendees was Helene Meyer, the dignified, well-spoken woman who founded the festival in honor of her late husband, Gene Meyer, an enthusiastic supporter of TPAC. Helene Meyer wanted to create an event that would be different from the typical writers’ conference, in which participants cram themselves into a ballroom and listen to speeches all day. Typically their only personal contact with the guest writers would be to stand in line for 30 minutes to get an autograph. Meyer wanted an event that would be “small in size, intimate in scope.” She thought Washington Island was the perfect place for such a meeting.

After breakfast, the group moved into the auditorium for discussions and lectures by a faculty of distinguished writers, many of whom have lived unusual and interesting lives. Rachel DeWoskin, for example, left America for China when she was 21 years old in search of a more “fiery” life. She found a job playing a young femme fatale in a popular Chinese soap opera called Foreign Babes in Beijing (also the title of her first book). On her first day at work, the makeup artists teased her hair to towering heights, painted her eyelids pink, and dressed her in a fur coat. When she meekly suggested such an outfit might not give a realistic picture of an American exchange student, she was told, “We don’t care what you think. This is how the Chinese people visualize Westerners.”

Kao Kalia Yang writes movingly about her family’s experiences as refugees in Thailand and later as immigrants in Minnesota. The most unusual life story, however, was that of David Stuart MacLean, the author of The Answer to the Riddle is Me. His big adventure was to awaken on a train platform somewhere in India, with no idea who or where he was.

“I had lost my passport,” he writes. “I was in a train station in a foreign country without my passport. Then I realized that I couldn’t even think of what name would have been on the passport if I had one or what foreign country I was currently in.” His condition was later diagnosed as a severe reaction to a drug to prevent malaria.

MacLean’s parents were located and they took him home to Ohio – but to MacLean, “home” was not a haven but a bizarre and unsettling place. The walls were plastered with pictures of him, “a museum of myself,” he said. His father’s office was painted “a terrifying shade of red,” and when he turned on the television set, he found himself watching an educational program of a live gastric bypass operation.

After his condition improved somewhat, MacLean sought out the cheapest psychiatrist he could find in order to save money for cigarettes and alcohol. As is often the case, he got what he paid for. On one of his visits, he told the psychiatrist about a nightmare involving a convenience store, and she told him that convenience store workers are some of the most important people in the universe because they are “the reincarnated souls of people who died in the Holocaust. They need the mundane nature of those jobs to make sense of what happened to them in their previous lives.” He felt an uplifting sense of relief: he was not the craziest person on the planet! “It was the first time I’d felt healthy in a year and a half,” he wrote.

Environmentalists in the audience were no doubt impressed by Dan Egan’s newly published book The Death and Life of the Great Lakes, described on the dust jacket as “a landmark work of science.” Egan lives in Milwaukee, where he is a prize-winning reporter for the Milwaukee Journal Sentinel. He first became interested in water pollution during his childhood in the Green Bay area, when the Fox River was too polluted for swimming. As an adult he took a course in book writing, and one of his assignments was to prepare a detailed outline and proposal for a book. Quite naturally he chose the subject of water pollution, but he must have been surprised when his proposal was accepted by W.W. Norton and Company. He was also horrified: now he would actually have to write the book. But his work paid off: The Death and Life of the Great Lakes was a finalist for the Pulitzer Prize.

After the presentations, participants were invited to a dinner at which they would share tables with the guest writers. They heard readings by Wisconsin Poet Laureate Karla Huston and Door County Poet Laureate Sharon Auberle. Anyone who wanted more inspiration could return in the morning and attend a brunch with the authors. According to the program of activities, this brunch would feature “lively conversation about books we’re reading.” Possibly some of the conferees were already dreaming about the sixth literary festival in 2018.