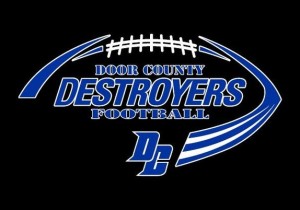 Coming off of a 1-1 record in pre-season play, and a 28-28 tie against the Muskego Hitmen last Saturday, the Door County Destroyers Semi-Pro Football Team will face the Racine Raiders on Saturday, June 20. at 4 pm at the Baileys Harbor Recreational Park. In what is predicted to be their toughest challenge of the season, the home field advantage and the support of the hometown fans will be a factor in the game’s outcome.

After winning the 2014 Wisconsin State Football League (WSFL) Championship, the Destroyers upgraded to the Mid-States Football League (MSFL) to provide their fans with the thrill of more competitive, harder-hitting games. Saturday’s opponents are the longest continuously operating minor league football team in Wisconsin and has claimed nine national championships, with the most recent titles coming in 2014 and 2012.

In their June 13 game at Whitnall Field in Muskego, the Destroyers came out strong in the first half as they scored 3 times to take a 22-13 lead going into halftime. Late in the 4th quarter, the Hitmen tied the game at 28 but with 53 seconds left on the clock, the game was called due to lightening.

Owner & Vice-President Chris LeCloux shared that “We had a large number of standout performers on the Destroyers team, including Quarterback Alex Whitney who threw for 121 yards and 3 touchdowns, Running Back TaMar Scott with 11 carries and 1 TD, and Defensive Tackle Robert Sallie with 1 sack of his 4 tackles of the game. A strong showing was made by many.”

Looking ahead to Saturday’s game, Owner & President Ryan Zuehlke explained “Our job as players is to give it our best on the field – to play hard and to win the game. We also gain a lot of our motivation from our fans and having a big crowd against the Raiders will push us even harder to stand firm on our home turf.” Without the support of their fans, the Town of Baileys Harbor, and the Baileys Harbor Rec Park, Door County would not have a Championship Semi-Professional team to call their own.

Future home games are scheduled for July 18 against the Sheboygan County Rebels, and August 1 against the Lincoln-Way Patriots. All games are played on Saturdays at 4:00 pm. Game tickets are $8.00 each and include one beverage of choice. Tickets are available at the gate on game days, or available in advance by contacting Zuehlke at 920.559.1197 or Christine Salmon at 920.609.7615.