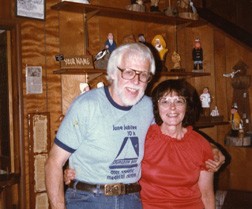 Pudge and Mary DeGraff in the Whittler’s Workshop in Sturgeon Bay.

The “Woodcarvings by Pudge and Mary DeGraff” exhibit is nearing the end of its run at the Door County Maritime Museum. Only a few weeks remain to take in this extraordinary collection of woodcarvings. The exhibit celebrates the work of Edward “Pudge” DeGraff and his wife Mary. The last day to see the collection is Nov. 3.

The exhibit features more than 100 whimsical carvings on loan from people from as far away as Waltham, Mass., and Toronto, Canada. On display in the Museum’s Reddin Bridge Room gallery, the exhibit is believed to be the largest collection of DeGraff works ever assembled.

Pudge began carving in the 1930s as a Boy Scout, spent his free time in the Navy developing his whittling skills and eventually resigned from his full-time job to pick up the knife on a full-time basis.

Pudge, Mary and family moved to Sturgeon Bay in 1969 and the Whittler’s Workshop became one of the city’s most popular galleries. Pudge and Mary eventually produced thousands of works, many carrying the maritime theme so appropriate on the peninsula until Pudge’s death in 1997.