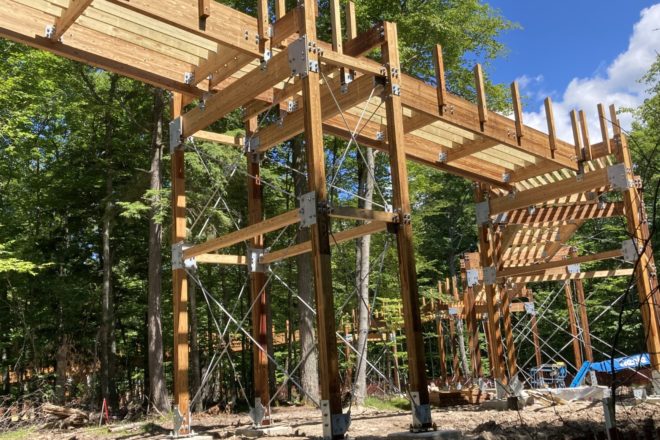 The ramp to the new Eagle Tower in Peninsula State Park. Photo by Tom Blackwood.

Much has been made of the loss of Eagle Tower and potentially Potawatomi Tower, but two new towers are rising toward completion in Door County.

At Peninsula State Park, progress on the new Eagle Tower continues, with hopes for completion by the end of the year. The new tower will be shorter than the original, 76-foot Eagle Tower that closed in 2015, but it will include an 850-foot ramp that will meander through the tree canopy to provide access to the top to people with disabilities.

Steve Strucely of the Friends of Peninsula State Park said the public should be able to climb the tower for the first time in early spring of 2021.

In Sturgeon Bay, the Door County Maritime Museum’s Maritime Lighthouse Tower is on track to open its top deck for public views in December, according to Kevin Osgood, the museum’s executive director. The 10-story, 110-foot-tall tower won’t quite be ready for prime time at that point, but residents will get a chance to take the elevator to the top floor to check out the panoramic views of the city, bay and shipping canal.

Osgood said the tower’s first three floors should be completed for opening in May 2021. When fully completed, the tower will be themed by floors. A theater will occupy the first floor; shipwrecks will be featured on the second; and fishing, recreational boating, shipbuilding, maritime commerce, maritime navigation, maritime people and Door County’s maritime environment will be highlights of the other floors.