A group of dedicated Gills Rock anglers and charter captains will again babysit a large group of six-month-old Chinook salmon for two weeks. 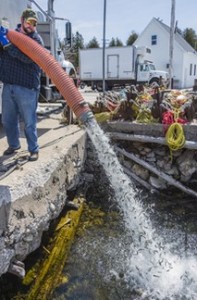 The Wisconsin Department of Natural Resources began stocking Gills Rock with 30,000 Chinook fingerlings in 2014, after complaints from area charter captains that their businesses were being affected by a lack of Chinook.

That first year, the small fish were released into still icebound waters. With the 2015 stocking, the Gills rock group was allowed to hold a third of the fish – or 10,000 – in holding tanks for two weeks to give them a better chance of survival in the big lake.

“This year we’re going to be keeping half in the net pens for two weeks,” said Don Grasse of King Fisher Charters.

Grasse said the fish will be delivered May 3. Half will go into net pens and the other 15,000 will be released in deep water in the dark so they have a better chance of avoiding cormorants and other predators.

Grasse, Mike Di Iulio of Capt. Paul’s Charter Fishing, Tim Guckenberg of Reel Addiction Charters and Paul Schwengel, who has kept a boat in Gills Rock for 30 years and led the fundraising effort for net pens to hold the fingerlings, will take turns feeding the Chinook twice a day while they are in the pens.

Grasse said the evidence that the stocking program is working can be seen in the fall when the “imprinted” fish return to Gills Rock. Imprinting means the fish consider that area their natal home so they return to spawn in the fall.

The Gills Rock Chinook represent just a fraction of the 2.6 million fish being stocked by the DNR in 2015. In a press release, the DNR reports that it will use recent harvest data and survey research for future stocking efforts.

Brad Eggold, DNR southern Lake Michigan fisheries supervisor, said the department’s stocking efforts are part of a strategy that complements natural reproduction in the lake and its tributaries to provide diverse angling opportunities.

“We are committed to sustaining and improving the world-class fishery in Lake Michigan while recognizing that the makeup of the fishery may change over time,” Eggold said. “Based on the best available science and our own management experience, we stock strategically to optimize returns while taking advantage of natural reproduction to maximize efficiency. We also work closely with partners in our neighboring states and the federal government to manage the resource in a coordinated way.”

Overall, 2016 Wisconsin stocking numbers are expected to total 2.3 million Chinook and Coho salmon, as well as brown and rainbow trout. Chinook salmon will again represent the greatest number of fish stocked. Plans call for the release of approximately 808,254 Chinook, down from 823,496 for 2015.

In 2013, Chinook salmon stocking was reduced by 30 percent because of concerns about declining alewife populations. This year’s stocking plan continues to reflect those concerns as recent survey data indicates record low levels of alewives and other forage fish due to predation and invasive quagga mussels removing nutrients from the water.

Estimates by the U.S. Fish and Wildlife Service indicate that natural reproduction currently accounts for more than 60 percent of all Chinook in Lake Michigan and the stocking plans by Wisconsin and other states attempt to factor in the impact of these wild fish.

Eggold said the above-average survival rate of Chinook stocked by Wisconsin means anglers here benefit both from stocked and naturally produced fish that spend a significant amount of time feeding along the lake’s western shore during the summer and from the stocked fish that return to spawn in the fall. DNR continues to review its Chinook stocking distribution and is working with stakeholder groups using net pens in five locations and a subset of those to study whether this rearing and release technique improves fish growth and returns.

In 2016, the Wisconsin waters of Lake Michigan should also receive about 800,000 lake trout produced by U.S. Fish and Wildlife Service.