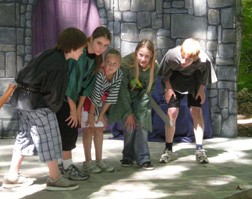 Every summer since 2005, Third Avenue Playhouse (TAP) has offered a theater day camp for children ages 9 – 14. The camp runs mid-June to mid-July, five days a week, four hours a day. Our inaugural group of campers has graduated from high school. A number of them have stayed active in theater, performing in community theater productions, participating in their school shows. Several have decided to major in theater or arts administration as they head off to college. We love those stories. But – and this may surprise you – churning out new actors is not the principle on which our camp was founded or why we continue to seek financial support for it each year. It is not why our volunteer camp supervisors turn over many of their precious summer weeks to the program. And it is definitely not why – with or without adequate financial support – we hold our tuition at levels designed to ensure that no child will be turned away.

So why do we think this program is so important? Rather than recycle my own thoughts and words on the subject, I’d like to share some excerpts from a speech Kevin Spacey recently made as part of Arts Advocacy Day 2011.

Acknowledging that the public policy debate on support for the arts is not new, Spacey asked his audience pointedly, “Does it matter? Does it matter how much the arts can shift and change a single individual child’s life? Does it matter…that a child be taken to see a play…a child from a modest background who is shy, insecure…a child with a secret dream, searching for his place?”

The child Spacey is referring to is himself and, for the next 40 minutes or so, he went on to demonstrate that it matters very much to him and, over the course of our nation’s history, to a great many of our social and political leaders. From Eleanor Roosevelt’s proposal for a center for the cultural arts in the 1930s to Dwight D. Eisenhower’s signing of the National Cultural Center Act in 1958. From Lincoln’s love of and reliance on the arts in the days of the Civil War to John F. Kennedy’s admonition that “the nation that disdains the mission of art invites the fate of having nothing to look backward on with pride and nothing to look forward to with hope.”

Winston Churchill when told there would have to be substantial cuts to the arts due to the mounting costs of World War II responded simply, “Then what are we fighting for?”

And at another time, during yet another war, Richard Nixon observed that “the arts have the rare capacity to help heal the divisions among our own people and to vault over some of the barriers which divide the world.” 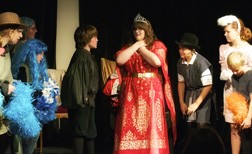 Spacey’s impassioned plea for federal funding for the arts resonates at all levels of community. Funding for the National Endowment for the Arts (NEA) impacts us at the state level because the NEA funds part of the budget for the Wisconsin Arts Board, an agency already targeted for a 73 percent cut as part of the proposed Budget Repair Bill. And it is critical to note that, in 2010, a significant percentage of the funds awarded through the Wisconsin Arts Board’s Creation and Presentation Program were received by Door County arts organizations. Further, a cut to the Arts Board budget will mean less or no funding for local re-granting organizations like Door County’s Peninsula Arts Association.

In 2010, I spent the better part of two months writing my first Wisconsin Arts Board grant for the theater. It’s a lengthy, somewhat intimidating application and at first I struggled with it. But eventually something quite wonderful happened. I began reading what I was writing as if I were being introduced to TAP for the first time. Here are some of the facts that emerged:

• That TAP holds, on average, 75 main stage performances a year

• That since opening our doors in October of 2,000, we have presented almost 400 separate events, many of them with multiple performances

• That in 2009 alone, 304 artists performed here; over 8,000 members of our community benefited either as participants or audience members; and, of that number, almost 500 were children

Why do we think our theater day camp and programs like it are so important? Because they matter. Because as Spacey so aptly observed, “We can teach young people to better communicate, help find their confidence and learn to collaborate – whether or not they have any interest in going into a career in the performing arts.” Because although it doesn’t always feel like it, it’s worth remembering that ordinary people, one by one, have always and will always set the course of history. Because the commitments we make today form our contract with the future.

I invite you to come and observe the young people in our theater camp this summer. Be inspired. If not for yourself, for your kids.