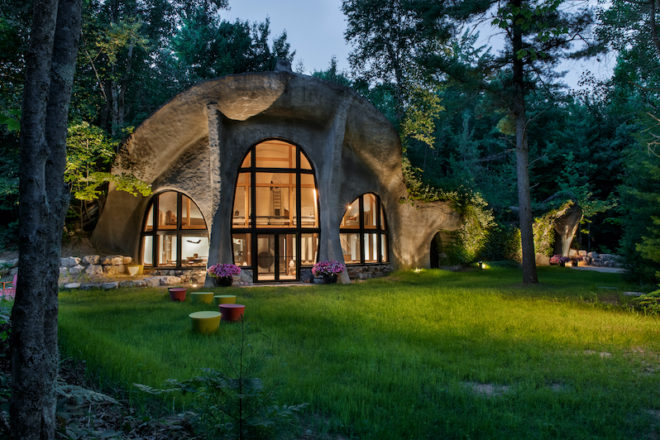 After sitting vacant for several years, the Dome House opened its doors to working artists for the first time in 2021, ushering in a new chapter for the curious dune dwelling that sits on a two-acre plot on South Cave Point Drive. Minnesota-based fiber artist Amy Usdin was one of two Midwest artists who was selected for the inaugural program last year.

“I had recently begun weaving onto vintage fishing nets and was working from faded memories of conflated shores I’d walked upon,” Usdin recalled.

Rather than sit in her Twin Cities’ studio, Usdin had hoped to spend some time working on her latest projects near a body of water in a community deeply rooted in fishing. The timing of the Dome House residency – and the geographical location – were kismet.

Aside from being able to return to Door County after a 20-year absence, Usdin said the opportunity intrigued her because she wanted to see how direct observation might influence her work. As it turned out, the area surrounding the Dome House, with its proximity to the Lake Michigan shoreline, was just one of the many sources of inspiration Usdin encountered.

“The peninsula is so rich geologically, from The Ridges to Newport State Park, with bits of many places making it into my work,” Usdin said. “To immerse myself in the natural surroundings and then work late into the morning fostered unique productivity.”

So much so that she completed two weavings during the six-week program. The first piece – part of an ongoing series – took on more texture, color and form than previous pieces she had completed in her usual studio setting.

“The second one, inspired by the picture-window view of the sparkling lake during a neighborhood chili potluck, is woven on a different sort of fishing net and employs a new technique that the environment inspired,” Usdin explained.

Aside from the inspiration gleaned from the property’s natural surroundings, the home itself served as a muse.

“If the Dome House interior is a visual wonder – and it is – the studio is an auditory one,” Usdin said.

She recalls windy days spent with the large garage-style door wide open, the sound of the crashing waves reverberating against the concave walls in a meditative pattern. The solitude and enormity of the studio provided space to process not only her work, but also her emotions – specifically, the grief she was working through after losing both parents just one month before the residency.

“To be so small in such a grand space reinforced [that] we are all part of a larger system, which helped me focus more outwardly at a time when I could have easily retreated,” she said. “It’s valuable to get out of one’s own space, mentally and physically, to see how someplace unfamiliar can stimulate creative shifts.”

With residencies hard to come by, the credibility of having participated in a museum-sponsored one was a professional affirmation that Usdin is grateful to have had – and one she hopes other artists will take advantage of.

“Combining the beauty of the peninsula, the majesty of the Dome House and the opportunity to work without distraction is awesome in the most nonclichéd sense of the word,” she said. “The people associated with the Miller Museum are genuine, enthusiastic and full of heart, alongside a welcoming community of generous artists, gallerists and neighbors.”

Visit domehouseart.org/apply to read more about the 2022 Dome House Al & Mickey Quinlan Artist Residency and access the online application. The deadline to apply is April 30, 2022.